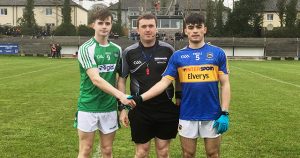 By Eamonn Dornan for the Irish Examiner newspaper

Tipperary will meet Waterford next Wednesday in the second round Munster MFC play-off after this extra-time win over Limerick in Newcastle West last night.

It was Limerick that kicked four late points to ensure extra time, but they could only find one score in extra-time, as Tipperary edged to a four-point victory. There was a penalty for each side in the opening half, after which Limerick were 1-4 to 1-3 ahead. Limerick had moved 0-4 to 0-1 ahead after 10 minutes, with Eoin Murphy kicking successive scores, but then they went 15 minutes without a score. The Tipperary goal came at the mid point of the half, when Kyle Shelly dispatched a low shot to the net from the a penalty.

The next score was another penalty, albeit 10 minutes later, which Dylan Moloney finished in style. Christy English had a point late in the half, but Limerick led by the minimum at the break. Tipperary bossed the early minutes in the second half to move 2-6 to 1-4 clear, with Shelly scoring his second goal. It was 13 minutes into the half when Moloney had a Limerick score with a free, but when Sean O’Connor kicked a Tipperary free, they were 2-7 to 1-6 ahead entering the final quarter.

They weren’t to score again and Limerick found the final four points to force extra time; all were frees, apart from the final score in injury time from Keith O’Kelly. Tipperary were a point up at half-time in extra-time and Limerick failed to score in the second 10-minute period.

The Tipperary side to face Limerick this Wednesday in the Electric Ireland Munster minor championship has been announcedhttps://t.co/WODr2Gnvmn pic.twitter.com/9PGDdfxif2