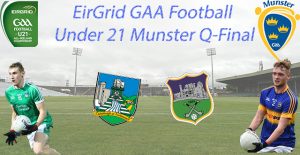 Limerick defeated Tipperary by 0-16 to 0-14 after extra time in the Eirgrid Munster Under 21 Football Championship Quarter-Final on Wednesday March 8th at the Gaelic Grounds Limerick.

Dramatic win for Limerick over Tipperary at the Gaelic Grounds

In a quite dramatic game, with cards aplenty, Tipp had Emmet Moloney and Willie Connors sent off in normal time, before influential midfielder Jack Kennedy and Jordan Moloney were dismissed on black cards in extra-time.

Limerick also lost Josh Ryan to a red card in stoppage time at the end of the regulation hour but Tipp finished the Gaelic Grounds tussle with 14 players, having used six subs when Moloney was black-carded.

That allowed Limerick to come from three points down and finish with a flourish to set up a semi-final clash with Cork next week.

The sides were deadlocked at 0-10 apiece at the end of 60 minutes and while Kennedy thought he’d won it for Tipp with a free deep in stoppage time, there was still time for Limerick to draw level.

Robert Childs, in the seventh minute of additional time, with five having been signalled, launched a magnificent score from the right touchline and Limerick were back in business.

Tipp opened extra-time with real intent, Ross Peters, the excellent Paudie Feehan and Kennedy landing scores, and they led by 0-13 to 0-11 at the turnaround, before Limerick came thundering back.

Adult General Admission: €10.00
Concession (Student/Senior): €5.00 rebate available on full priced Adult tickets on match day prior to entry with valid ID
Juvenile (Under 16 years of age): Free of Charge
All tickets for this match are UNRESERVED

Limerick u21 team vs Tipperary this Wednesday night in Gaelic grounds has announced. All support would be greatly appreciated #LuimneachAbu pic.twitter.com/ymsWneGQ82

The Tipperary football team to play Limerick in the EirGrid Munster U21 Football Championship Quarter-Final in the Gaelic Grounds tomorrow night, Wednesday March 8th at 7.30pm has been announced by manager Declan Browne.

The team lines out as follows –

U21 preview – Declan Browne: ‘Who are we to think that we are better than Limerick?’ – https://t.co/ObG09VbvFA @tipperarygaa #Tipperary pic.twitter.com/wPglX8ROcn