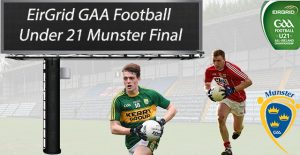 Kerry defeated Cork by 2-16 to 0-6 in the Eirgrid Munster Under 21 Football Championship Final on Wednesday March 29th at Pairc Ui Rinn.

Video Footage of the Entire Game

While Cork – seeking a sixth provincial title in seven years – couldn’t start key players Kevin Flahive or Stephen Sherlock, some senior counties would have struggled to deal with the Kingdom, featuring 14 players who had won All-Ireland minor medals in the past three years.

In front of 3,861, Kerry began like they meant business and within the first seven minutes they had four unanswered points on the board, Kilian Spillane with two while Seán O’Shea and Cathal Bambury were also on target.

In the midst of that, Cork’s Michael Hurley was unlucky not to cap a driving run with a goal, his shot hitting the post, and the Rebels suggested that they had settled when a free from captain Seán O’Donoghue was followed by two points from Brian Coakley.

Instead, though, Kerry found another gear and pushed on to open up a lead that Cork wouldn’t be able to bridge. In the 19th minute, they struck for a goal as wing-back Brian Ó Beaglaioch – pushed up on Cork sweeper Michael Dineen – cut through and squared for full-forward Matthew O’Sullivan, who had an easy task from close range.

An excellent Spillane point from the left was followed by a good O’Shea free and Kerry were good value for their 1-6 to 0-3 half-time lead. By the time Cork would get their fourth point, a Gary Murphy free in the 38th minute, Kerry had added another four of their own in the opening seven minutes of the second half. The impressive Tom O’Sullivan got things going after the restart before O’Shea and Spillane (two) opened up a ten-point advantage.

Murphy’s point didn’t signal a Cork comeback, with Andrew Barry continuing to dominate at midfield for Kerry. The points continued to come and half-time sub Conor Geaney was only denied a goal by a good Ross Donovan save.

At the other end, Cork wing-back Jerry O’Riordan might have netted, but Ó Beaglaioch made a great goal-line block. Even if it had gone in, a comeback wasn’t going to materialise but Geaney capped a good night for Kerry, who will present tough opposition for Galway or Sligo in the All-Ireland semi-final.

Who will win Wednesday's @EirGrid Munster Under 21 Football Final?

The Cork U21 Football team for next Wednesday's EirGrid Munster U21 Football Championship Final has been announced.https://t.co/HXSJUvxPx9

The Cork team to play Kerry in the EirGrid Munster U21Football Championship Final next Wednesday 29th March @ 7.30pm in Pairc Ui Rinn has been announced as follows.

The team shows 4 changes in personnel from the side that defeated Waterford in the last round; Brain Ó Beagaloich, Brandon Barrett and Matthew O’Sullivan who missed that semi final game due to injury return to the starting fifteen as does Gavin White of Dr Crokes who was club-tied on that occasion. They replace Jack Morgan, Cormac Coffey, Barry O’Sullivan and Lee O’Donoghue.

The Dr Crokes pair of Micheál Burns and Jordan Kiely, both of whom played in last year’s final, are included in the subs having also been club-tied for the previous two games.

The team, captained by Brian Sugrue of Renard is as follows:

With the exception of Matthew O’Sullivan, all of the side have played in successful All Ireland Minor winning sides since 2014 with Sean O’Shea a member of last year’s winning side.

TG4 will be streaming the EirGrid Munster Under 21 Football Final live via www.tg4.ie

The live stream will also be available to GAA fans worldwide.