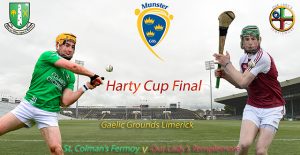 Our Lady’s Templemore defeated St Colman’s Fermoy by 2-22 to 1-6 in the Dr. Harty Cup Hurling Final on Saturday February 18th at the Gaelic Grounds Limerick.

Watch the full game via the Munster GAA YouTube channel below

By Jackie Cahill at the Gaelic Grounds, Limerick for the42.ie

THE FAMINE IS over! Our Lady’s Secondary School, Templemore, are Dr. Harty champions for the first time in 39 years.

Prior to today, Martin Bourke back in 1978 was the only man to captain the school, known then as Templemore CBS, to victory in the prestigious Munster post-primary schools competition. But Paddy Cadell, a member of Tipperary’s 2016 All-Ireland minor winning side, lifted the trophy amid joyous scenes at the Gaelic Grounds in Limerick, following a 19-point rout of St Colman’s.

In front of 4,924 spectators, Our Lady’s weren’t going to be denied on this occasion. They’d lost four finals (2000, 2002, 2013 and 2016) since winning the competition all those years ago but fielding eight of the players who started in last year’s final loss to Ardscoil Rís, Templemore were inspired.

Skipper Cadell marshalled a rock-solid rearguard as, from the off, Our Lady’s made their intentions clear, racing into a 0-5 to 0-0 lead within nine minutes. McGrath got the ball rolling with a free before Nolan, Kelly, McGrath again and Andrew Ormonde pointed from play.

9-time champions St Colman’s, in their first Harty final in 14 years, finally got off the mark when wing-back Eoin Roche put over a ninth-minute point but in the opening half, none of their forwards managed to score from play.

Niall O’Leary also contributed from the half-back line while midfielder Diarmuid Lenihan scored two frees.
In contrast, Our Lady’s would finish the first half with five of their six forwards on target, while Nolan contributed three points from midfield.

Ahead to 0-6 to 0-2, Our Lady’s struck for goal in the 17th minute and it was a brilliant Andrew Ormonde effort as he left Kieran Neville trailing in his wake before crashing a shot into the far top corner. Our Lady’s were almost in for a second goal three minutes before half-time but Ray McCormack’s shot was blocked by St Colman’s goalkeeper Eoin Davis. In first half stoppage time, Our Lady’s managed three points to open up a 1-12 to 0-4 interval lead.

They were full value for that 11-point margin, too, and other scores were left out there as Our Lady’s registered eight wides before the break, compared to just two for St Colman’s. Our Lady’s were too hot to handle, as McGrath played the ‘link man’ role brilliantly from centre forward, scoring three points and assisting two more in the first half.

A 24th-minute score vividly illustrated how tuned in Our Lady’s were, as Nolan and McGrath played a one-two before Nolan arrowed over a classy score. David Lardner pointed from play early in the second half as St Colman’s forward finally got on the scoresheet – but that was the sum total of the attacking sextet’s efforts.
O’Leary was the best St Colman’s player on view and after he was shoved into attack, the Castlelyons starlet bagged a 49th-minute goal.

But within a minute, McGrath had cancelled that out at the other end and when he added a free, Our Lady’s were 2-20 to 1-5 ahead. It was a day when a far superior Our Lady’s outfit would respond to whatever was thrown at them and their commitment to the cause was summed up in stoppage time when Nolan threw his head in the way of Lardner’s shot – and was taken off with blood streaming from his face.

Colman’s will now regroup for an All-Ireland quarter-final clash with St Brigid’s of Loughrea, with Our Lady’s safely through to a Croke Cup semi-final on 11 March.

Don’t miss out on Saturday’s souvenir 48 page match programme with plenty of articles, pen pictures, photos and everything you need to know about the Harty Cup Finals past and present.

Extra time to be played if necessary in the Corn Thomais Mhic Cholim final. If there is a draw in the Dr. Harty cup final, the replay will be on the 25/2/2017.

Live Streaming – Both the Harty Cup Final and Saturday’s curtain-raiser (Corn Thomáis Mhic Cholim (18.5 B Hurling) Final between John the Baptist Hospital and Rice College Ennis at 12 noon) will be streamed live on www.munstergaapps.ie

The Gaelic Grounds Limerick will play host to the Dr. Harty Cup Final on Saturday next when Our Lady’s Templemore take on St. Colman’s Fermoy at 2pm.

St. Colman’s Fermoy sit fourth on the Harty Cup roll of honour with nine titles but it is all of 14 years since their last victory when they finished off a memorable three-in-a-row of Harty Cup successes (2001 to 2003).
This year’s campaign began with a tough opening group game against local rivals Midleton CBS. Despite trailing heading in to the closing stages, a strong finish ensured Colmans won by four points. In the last 16, Colmans played St. Flannans (who had earlier lost in the group stages to Our Lady’s Templemore by 11 points) in Kilmallock. St. Colmans were strong favourites to progress and the Cork school led by 7 points early in the second half. However, St. Flannans play improved immeasurably as they went on a 2-5 to 0-1 run to race in to a three point lead heading in to added time. There was still time for one last Fermoy scoring opportunity and Diarmuid Lenihan duly found the net from a free 40 metres from goal to force extra time. Normal service was resumed in extra time as Colmans ran out winners by 9 points.

A Quarter-Final meeting with CBC Cork now awaited and a dominant first half performance was enough to ensure that Colmans would progress, winning in the end by six points. Another meeting with CBS Midleton in the semi-final was next on the agenda. CBS Midleton had accounted for the 2016 champions Ardscoil Ris after a replay in the Quarter-Final and were fancied to progress by many. However, Colmans scored an all-important goal in a low scoring game and qualified for the Harty Cup Final on a scoreline of 1-8 to 0-7.

Our Lady’s Templemore on the other hand had an easier route to the final. A first round meeting versus St. Flannans saw the 2016 Harty Cup finalists lay down a marker by securing an 11 point victory at MacDonagh Park Nenagh. A meeting with Árdscoil Uí Urmaltaigh Bandon in the Last 16 proved to be a no-contest as the Templemore team racked up a facile 6-27 to 0-3 victory. These two games proved little by way of preparation for Templemore’s Quarter-Final meeting with old rivals Thurles CBS. Despite playing against the wind in the first half, Templemore scored two goals and led at half-time. Thurles made it difficult for Templemore for much of the second half but lacked scoring power. A late Templemore goal gave them a flattering 10 point victory.

In the semi-final, a meeting with Nenagh CBS brought a huge crowd to the Toomevara GAA grounds. As with the other semi-final, this was a low scoring affair and a Templemore goal proved to be the crucial score as a battling Nenagh side were unable to match Templemore scoring prowess and lost out by 1-15 to 0-14.

By virtue of their impressive march to the final, allied to the experience of at least half their team being involved in last year’s final will see Our Lady’s Templemore marked down as favourites. Successful Tipperary Minors such as Paddy Cadell, Brian McGrath and Lyndon Fairbrother have led their side well in the campaign to date. Templemore CBS won this title back in 1978 and despite a few final appearances since then, will be looking to bridge that 39 year gap with victory this year.

St. Colmans have been impressive also in their campaign. Aside from the near slip-up against St. Flannans when lady luck was on their side, getting the better of a strong CBS Midleton team on two occasions cannot be underestimated.

Saturday’s game is sure to attract a big crowd to the Gaelic Grounds Limerick so why not arrive early and take in the curtain-raiser, the Corn Thomáis Mhic Cholim (18.5 B Hurling) Final between John the Baptist Hospital and Rice College Ennis at 12 noon. If you cannot make it to the Gaelic Grounds, both finals on Saturday will be streamed live via www.munstergaapps.ie. Don’t miss out.

Rory McGann of Clare will be the referee for Saturday’s Harty Cup Final and may the best team win.