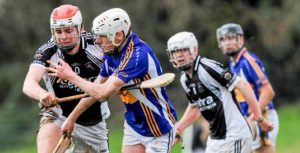 Thurles CBS finished with a flourish to claim Dr Harty Cup glory for an eighth time in Mallow this afternoon. Trailing by a point with 11 minutes remaining, Thurles landed four in a row down the home straight to capture the coveted silverware for the first time since 2009.

The dream dual double died for Rochestown as the Corn Uí Mhuirí finalists were foiled in their first Harty decider. Despite playing against the breeze in the second half, Rochestown still managed to rally from four points down at half-time to draw level by the 44th minute. And with eleven minutes remaining, Rochestown were a point clear when their leading scorer, Ciaran Cormack, landed a free to establish a 1-12 to 2-8 lead.

But Thurles, inspired by midfielder Billy McCarthy, were strong down the home straight and the Thurles Sarsfields dynamo landed two crucial points to put the winners a point ahead again. Kevin Duggan and Michael Connors added further scores for Thurles as they came on strong just when it was needed most to settle a tie that had been level five times.

Thurles lost Niall Heffernan to a second yellow card at the death but they had done enough by then. First half goals from Kevin Duggan and McCarthy were crucial to this latest Harty success for Thurles, who led by 2-7 to 1-6 at the midway point. After Cormack scorched through for a sensational tenth minute goal for Rochestown, Duggan netted in the 16th minute before McCarthy struck on the stroke of half-time.

Shane Kingston was excellent in that first half for Rochestown, collecting three points from play, but the Douglas starlet had a good goal chance saved by William Tierney with 13 minutes left, at a time when Rochestown were a point down. Robbie Long, lively throughout, could have netted for Thurles five minutes before the break but his shot drew a fine save from Andrew Cullinane, before Long followed up to point the rebound.

Congratulations to @cbsthurles on a great victory in today's Harty Cup Final pic.twitter.com/VFzsVT99Tc

By Bob Lester for the Irish Examiner newspaper

On a biting cold afternoon for hurling, Thurles really had to grind out this final win — their eighth in all — and they can thank their lively forward division for this sweet success, their first since 2009, one that looked unlikely for much of the contest.

All their front men hit the target, as well as late substitute Michael Connors, while, for the most part, Rochestown were too reliant on Ciarán Cormack and Shane Kingston (1-10 between them) for scores. Indeed had Kingston put away a gilt-edged chance in the 46th minute — his shot brilliantly saved by Thurles keeper William Tierney — it might have been a different outcome.

Thurles finished both halves with skill and aplomb in the face of strong St Francis College play and it was this toil and effort that gave them the authority to lift the famed trophy. Yet Rochestown started so brightly, Sean Powter and Kingston quickly putting them two points clear. Niall Heffernan, with a free, and Paul Kennedy did level it up, but it was Rochestown, with the aid of the cutting breeze, who were looking sharper, with Darragh Kelleher and David Griffin strong in the half-back line.

And then a great Rochestown goal in the ninth minute, Kingston finding Cormack with an awkward ball, but, with a lot to do, the big Blackrock man showed great skill in controlling the sliotar before firing a belter past Thurles keeper Tierney. Rochestown were in control now and led 1-4 to 0-4 after a lively opening quarter.

Then they were hit for six, sloppy defending by the normally reliable John Cashman saw Ronan Teehan find Kevin Duggan in space and the centre-forward gave Andrew Cullinane no chance to level things up. Undeterred, Rochestown battled back with points from Kingston and Cormack but could not maintain the momentum as Thurles hit them hard in the closing six minutes of the half.

First, tasty full-forward Robbie Long missed a sitter, but did redeem himself with a point when the play broke. Niall Heffernan followed with a free and they led for the first time, in the 27th minute, with another fine point from Long. And then a real sucker punch for Rochestown in the 29th minute, again due to sloppy defending, corner-forward Teehan again the provider, setting up Billy McCarthy for a goal which earned Thurles a 2-7 to 1-6 interval lead.

Rochestown restarted with Daniel Meaney partnering Cathal Moloney at midfield, with Meaney playing deep and doing a fine job on the excellent Billy McCarthy at wing forward, who was a colossus for Thurles CBS, finishing with 1-2. But again Rochestown took up the running, and with quick, forceful hurling, they were level by 43rd minute with a couple of points from Cormack and one apiece from Kingston and Meaney.

But it was Thurles who led 2-8 to 1-10 entering the final quarter when Niall Heffernan, who was sent off for a second yellow offence late in the contest, converted his fourth free. All to play for now, but the portents weren’t great when Kingston was denied that goal chance. Two more Cormack frees did put high octane Rochestown back in front but they could not sustain the impetus, as Thurles found another gear.

With fine displays in defence from Dillon Quirke, Tom Hayes and Jack Skehan, Thurles upped the ante again. First Niall Heffernan to McCarthy, a cracking point, then another gem from the Thurles Sars man, followed by points from Kevin Duggan and sub Michael Connors and Rochestown were dead.

Thurles, with deadly assaults in the final minutes of both halves, had broken Rochestown hearts and the Cork lads will now have to pick themselves up for another final assault next Saturday, this time with the big ball in the Corn Uí Mhuirí decider against Pobalscoil Chorcha Dhuibhne at the Dr Crokes’ pitch in Killarney.