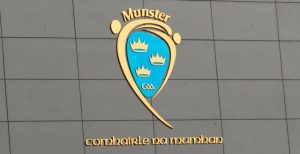 St Brendan’s have won their 21st Corn Uí Mhuirí final in the same devastating fashion in which they tore through all other comers this year. They scored two goals in the opening two-and-a-half minutes and from that point on it was just a matter of how much they would win by.They never took their foot off the gas, compiling 3-10, all from play, in the first-half, and adding 2-11 in the second.

That accounted for the highest total of the year by ‘The Sem’, while their usually stingy defence only leaked one point late in the second-half. It was as one-sided a final as you’ll see, and brought back some memories of Kerry’s All-Ireland Minor football victory over Tipperary last September. Clonmel’s Michael O’Reilly did get the first score of the game, a free, within a minute of the throw-in but the next two plays effectively ended the underdogs’ hopes.

After only 90 seconds Evan Cronin had coolly billowed the net, grabbing Dara Moynihan’s precision high ball and side-stepping his marker to score. Then, only 45 seconds after that, Michael Casey prodded to the net, assisted by David Clifford’s pass. They could’ve had more goals too. Matt Barlow dived to block Peter McCarthy’s goalbound effort in the 10th minute, while Clonmel had a chance of their own through Michael Barlow, who saw his effort deflected over.

A further Barlow point left Clonmel 2-3 to 0-3 in arrears and, from there, The Sem continued to extend their advantage. Moynihan, wing-back David Naughton, Casey and Shaw, with a goal chance, all pointed for a nine- point lead.Then David Clifford took over, scoring 1-2 in succession, culminating with a 28th-minute tap-in goal after Aidan Tobin saved Cronin’s initial shot. Leading 3-10 to 0-6 at the break, St Brendan’s kicked on by scoring 1-11 without reply in 30 second- half minutes.

Clifford got three points of that total, while Cronin, Shaw, Lee O’Donoghue and Adam O’Shea all contributed a pair of points. The goal, in the 58th-minute, came when substitute Donnchadh O’Sullivan won and converted a penalty. Dara Ryan chalked up Clonmel’s only post-interval point in second-half injury-time, but William Courtney stormed downfield to add a fifth and final goal with the final kick.

It was all too easy for St Brendan's in the Corn Uí Mhuirí decider https://t.co/q85ON8cURc pic.twitter.com/521EiAryWk

ST BRENDAN’S COLLEGE Killarney captured their 21st Corn Uí Mhuirí title at Mallow this afternoon and the scoreline speaks for itself.
The game was probably over as a contest inside the opening few minutes when the Sem’s lethal strike force notched two goals in as many minutes.

Ironically Clonmel got the opening score when Mark Kehoe fetched the throw in and was fouled going through, and Michael O’Reilly converted the free. St Brendan’s response was immediate and deadly as Dara Moynihan picked up a ball that should have been cleared and parted to Evan Cronin, who drilled the ball low to the Clonmel net. Then, from the kick-out David Clifford fed corner forward Michael Casey, who slipped the ball low to the net.

Clonmel had no answer to Billy Courtney and Lee O’Donoghue at midfield, and this meant that the St Brendan’s potent attack simply toyed with the Clonmel defence and it could have been much worse. Points flowed from the boot of Clifford and the towering David Shaw, who enjoyed too much freedom once fullback Stephen Ryan was black-carded in the 25th minute. David Clifford finished to the net just before half time and St Brendan’s retired 3-10 to 0-6 at the interval.

The game fizzled out in the second half as St Brendan’s added six unanswered points inside the opening 10 minutes and it was as one-sided a contest as you are likely to see at this level. Two late goals from William Courtney and another from the penalty spot by Donnchadh O’Sullivan only emphasized the gulf in class between the sides. St Brendan’s look potential Hogan Cup contenders, though they have yet to be tested.