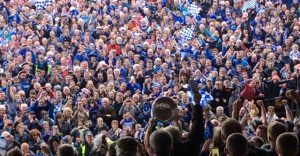 Waterford defeated Cork by 1-24 to 0-17 in the Allianz Hurling League Division 1 Final on Sunday May 3rd at Semple Stadium Thurles.

WATERFORD are Allianz Hurling League Division 1 champions for a third time. In front of 17,559 spectators at Semple Stadium this afternoon, Derek McGrath’s charges recorded a comfortable ten-point victory over Cork, to claim the silverware for the first time since 2007.

The Déise had nine different scorers in Thurles as substitute Tom Devine’s 64th-minute goal killed the Cork challenge.
Waterford’s ace marksman Pauric Mahony produced another high-class display, registering 0-11 as a first League title since 2007 was secured. And this victory represents quite a remarkable feat for Waterford, who were relegated from the top flight lin 2014 before topping Division 1B this year.

Captain Kevin Moran collected the man of the match award on the back of an inspirational display capped by three points. But Waterford had other stars all over the pitch, with Noel Connors and Austin Gleeson excellent at the back. Gleeson scored two stunning first half points, one a sideline cut and the other from play, as Waterford led by 0-11 to 0-7 at half-time despite registering eight of their 14 wides.

They had played into the teeth of a breeze blowing towards the Town End but goalkeeper Stephen O’Keeffe performed heroics to beat away Seamus Harnedy’s fierce drive in the 20th minute. Waterford, renowned for defensive solidity this year, preserved another clean sheet but were fortunate to escape the concession of a goal when Conor Lehane’s rasping second half drive struck for the crossbar.

Thoughts now turn to the Munster SHC meeting between the sides in five weeks time and on this evidence, Cork have plenty of work to do.
Lehane did manage five points from play but with the exception of Harnedy in flashes, the Rebels were pretty much toothless up front as the quest for a 15th League crown failed.

Well deserved victory for @WaterfordGAA! No fear and laying down a marker for the championship! #GAA pic.twitter.com/sYun8QeWvy

Season Ticket Holders will only need their season ticket cards and will be seated in the O Coinneainn stand. Croke Park will get a mail out to them in the coming days.

The group pass rate is also available €3 per juvenile and one adult free with every 10. (Form can be downloaded on GAA website http://www.gaa.ie/tickets-and-merchandise/tickets/gaa-club-offers/

This game will be shown live on TG4