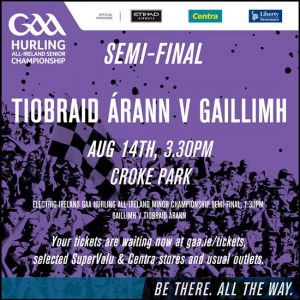 Tipperary defeated Galway by 2-19 to 2-18 in the All-Ireland Senior Hurling Championship Semi-Final on Sunday August 14th at Croke Park.

By Paul Keane at Croke Park for GAA.ie

Two goals in as many minutes late on from Tipperary sealed a remarkable All-Ireland senior hurling championship semi-final win at Croke Park, securing a glamour final date with old rivals Kilkenny next month.

The Munster champions trailed a determined Galway side by two points with nine minutes to go, but showed both character and class to get the job done with crucial goals from sub John ‘Bubbles’ O’Dwyer and John McGrath.

The 61st and 63rd minute strikes put Tipp three ahead and Michael Ryan’s side held on despite late Galway points from their top scorer Conor Cooney and substitute Shane Moloney.

Ironically, it was Moloney who tipped the balance Galway’s way with a late winning point in last year’s semi-final, but Tipp held out this time for revenge and a third final place in four years.

O’Dwyer’s introduction was vital as he also played in Noel McGrath for an important point and he will hope to have done enough for a starting place on September 4.

Seamus Callanan hit nine points for Tipp though all were from placed balls and he was well shackled by Daithi Burke having hit 3-9 in last year’s semi-final and 3-8 in the qualifiers against Galway the previous season.

It was tough on Galway, the beaten Leinster finalists, as they lost talisman Joe Canning and Adrian Tuohy to injuries at half-time. Galway at least led by two points at that stage after a strong first-half when they bounced back from the concession of five points in a row with a six-in-a-row of their own.

Canning scored four of those from placed balls while David Burke and Joseph Cooney got the other to put them 1-10 to 0-11 up at the break. The Galway goal was scored by Conor Cooney in the seventh minute when he was played in by Johnny Coen from the left and shot back across the ‘keeper.

The injuries were costly though and defender Tuohy left the fielding cradling his arm after picking up an injury while in the process of clearing a ball while Canning pulled up with an apparent hamstring injury. They were two huge blows for Galway though they battled on well and increased their lead to three points in the 43rd minute when Joseph Cooney punished slack Tipp defending with a brilliant second goal.

Brendan Maher tried to play a one-two with Seamus Kennedy, but Cooney nipped in to intercept and sped clear down the left before releasing a brilliant low shot across the ‘keeper to the net.

With Canning out of the action, Conor Cooney took over the free-taking duties and converted four of them in the second-half. Those strikes and points from Jason Flynn and Conor Whelan kept Galway in the ascendancy entering the final 10 minutes when they led 2-15 to 0-19.

But those two Tipp goals ultimately decided the contest. O’Dwyer got the first, capitalising on a great pass by John McGrath to beat Colm Callanan with a shot off the turf from a tight angle along the right endline.

Less than two minutes later McGrath struck himself, Callanan this time providing the pass from the left and a heavy shoulder from McGrath on the ‘keeper gave him the vital space and time to blast in what proved to be the winning score.

It’s as you were for Michael Ryan’s side as there are no changes in the first 15 to face Galway from that which started in last month’s Munster Final victory. Therefore, the Tipperary team lining out in Croke Park at 3.30pm is as follows –