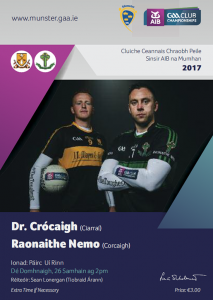 With no shortage in style, Nemo Rangers claimed a 16th Munster SFC title this afternoon, in doing so dethroning All-Ireland champions Dr Crokes and consigning them to their only defeat of 2017.

Watched by a 2,851 crowd in Páirc Uí Rinn, Nemo were full value for a victory founded in a terrific purple patch and confirmed with the brilliance of Luke Connolly in the second period.

Connolly helped himself to 10 points in a fine individual performance although there was excellent support from the likes of Paddy Gumley, Alan O’Donovan and Kevin Fulignati.

The only question mark over Nemo’s win was how they didn’t win by more and easier given how much they bossed proceedings in the first half. Crokes managed to close the gap to two points in the 41st minute but then Connolly struck over a quick brace and Paul Kerrigan opened up the margin to five.

Kieran O’Leary’s dismissal for a second yellow card crippled Crokes and while substitute Tony Brosnan had a late strike snuffed out by Micheál Aodh Martin Nemo were never truly threatened by a disappointing Crokes.

Nemo Rangers’s half-time advantage was four points, 0-9 to 0-5, and yet it hardly flattered them. In total, they had five goal opportunities in the first half, John Payne and Shane Murphy literally and metaphorically saving Crokes’ blushes.

While Connolly and Gumley were excellent throughout the period, they couldn’t make Nemo’s obvious superiority count. Payne was sharp to deny Barry O’Driscoll a chance at goal in the fifth minute and was again called on to stop Paul Kerrigan after the Cork captain cut a swath through the centre of the Kerrymen’s defence.

Payne then made a successful but desperate attempt to cut out Alan O’Donovan’s ball inside to Gumley when the Nemo full-forward looked set to find the net.

Goalkeeper Murphy took over fire-fighting duties from Payne first in the 20th minute when Gumley fed Connolly with an incisive pass and Connolly struck soundly on the volley only for the Crokes’ No1 to make an acrobatic save. That would have been enough for Connolly to curse him but Murphy then rejected his shot in the 25th minute.

With the scores 0-8 to 0-4 at that stage, Crokes might have been tasting Nemo’s dust but Brian Looney sent over a score soon afterwards to settle the visitors slightly.

Having gone ahead three times in the opening 10 minutes, they conceded six points in a row and looked dumbstruck, the inability to lay a hand on Nemo captain Aidan O’Reilly for his 17th minute score an indictment of their play.

Gavin White was the one Crokes’ player truly taking it to the opposition while Murphy, as excellent as he has been with his kick-outs for the Killarney club these last couple of seasons, was struggling to find his men as Nemo pressed up.

Tickets are also available to purchase in advance from participating Centra & Supervalu outlets – check out the Ticketing Store Locator for the location closest to you.