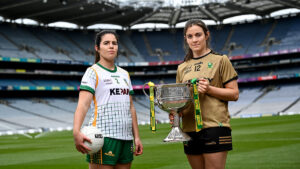 Meath defeated Kerry by 3-10 to 1-7 in the TG4 All-Ireland Ladies SFC Final on Sunday July 31st at Croke Park.

Maiden winners of the Brendan Martin Cup in 2021 with a stunning showpiece triumph against Dublin, the Royal County overcame a shaky start to retain their crown in front of 46,440 at Croke Park.

Louise Ní Mhuircheartaigh led the Kingdom charge, but with Niamh O’Sullivan and Vikki Wall in inspired form for their opponents, they fell short in their quest for a first senior title since 1993.

After wing-back Ciara Murphy and Corca Dhuibhne sharpshooter Ní Mhuircheartaigh kicked early points, the latter capitalised on a miscued short kick-out to loft the ball over the head of Meath goalkeeper Monica McGuirk for a 7th minute goal.

This was a dream start for the Kingdom but Meath responded in the manner of true champions.
Squeezed in between frees from Stacey Grimes and Wall, the raiding Emma Troy got on the end of a Kelsey Nesbitt pass to rifle the ball into the top left-hand corner. Having restored parity in lightning quick time, the Royals subsequently took control of the proceedings courtesy of four points without reply from Wall (two), Grimes and the ever-influential Troy.

Síofra O’Shea, Paris McCarthy and Lorraine Scanlon posted much-needed scores for the Kingdom but, with O’Sullivan and Grimes also finding the range in a lively second quarter, Meath brought a 1-8 to 1-5 buffer into the break.

While O’Shea and Ní Mhuircheartaigh points ensured this lead was narrowed to the bare minimum on the restart, Emma Duggan went on to become the third successful Meath free-taker of the game. The tie remained delicately poised, until the holders spectacularly turned the screw with two goals in the space of just four minutes.

The evergreen O’Sullivan palmed home on 45 minutes after referee Maggie Farrelly had signalled an advantage and this was followed by a clinical finish from Lynch, who had hit the crossbar with an initial effort.

This left Meath with an unassailable cushion but O’Sullivan’s superb point out towards the right-wing ensured Eamonn Murray’s side signed off on their latest success in emphatic style.

MEATH for the second successive year – or a 12th title for Kerry?

All will be revealed Croke Park in today’s TG4 All-Ireland Ladies Senior Football Final, with both teams unchanged from their semi-final starting line-outs.

For the first time since 2009, when Kerry won by 2-19 to 0-10 in a knockout tie, the two counties will lock horns in a Senior Championship tie.

There is recent Croke Park history, however, as Meath defeated Kerry in the 2021 Lidl National League Division 2 Final at GAA HQ.

Meath, as Division 2 champions, went on to claim the TG4 All-Ireland Senior title in sensational fashion.

Less than a calendar year after landing the Intermediate crown, Meath stormed to Senior glory, defeating Dublin to deny the Sky Blues five-in-a-row.

Meath are also Lidl National League Division 1 champions now but Kerry are the Division 2 holders, having seen off Armagh at Croke Park in April.

It’s the clash of the League champions on the biggest day of the year – and only one can prevail.
Remarkably, this is a fifth successive All-Ireland Final appearance for Meath. They contested three successive Intermediate deciders, finally cracking the code in 2020 against Westmeath, and are now back for a second Senior Final in a row.

For Kerry, this is a first All-Ireland Senior Final since 2012 and if they can complete the job they’ve started, the Kingdom will be crowned champions for a record 12th time.

Kerry and Munster rivals Cork currently sit level at the top of the all-time roll of honour with 11 wins each – but Kerry haven’t tasted glory since way back in 1993.

In terms of novelty factor, this Final certainly has it. You have to go all the way back to 2002, when Mayo defeated Monaghan, for the last time that a Final didn’t feature either Cork or Dublin.
The presence of Meath, Donegal, Kerry and Mayo in the last four brought a ‘wide open’ feel to the conclusion of the Championship.

Now that Kerry and Meath are here, they’ll be looking to their proven matchwinners to produce the goods.

These are also two sides that have bounced back from provincial Final heartbreak to successfully navigate their way to the All-Ireland decider. Meath lost out to Dublin in the Leinster Final, as Cork got the better of Kerry.

Since then, Meath and Kerry are both undefeated. In Louise Ní Mhuircheartaigh, Kerry have the leading scorer in the TG4 All-Ireland Senior Championship. Four games for the Corca Dhuibhne wizard have produced 3-22, a total of 31 points and that’s 13 clear of Meath’s leading scorer, Stacey Grimes, who’s collected 0-18.

Emma Duggan’s total of 1-11 to date for Meath shouldn’t be underestimated either. That late, late winner in the quarter-final against Galway will live long in the memory, and she was sensational in the semi-final victory over Donegal, scoring four points and earning the Player of the Match award. In clutch moments, Duggan’s a clutch player.

There’s been a feeling that Meath have been doing just enough in their recent games but there’s a resilience about them and when their backs are against the wall, they don’t do panic.

Kerry won’t fear them, though, because they know what Meath did to Dublin last year, when the Royals went into the Final as underdogs. If Meath could do that in 2021, Kerry will surely feel ‘why not us?’
Kerry have come through some big games to get here. Galway, Armagh and Mayo are notable scalps but Meath is the acid test.

The 2021 Lidl Division 2 Final ended with ten points separating the sides but both teams have moved on considerably since then – and are better teams now. Croke Park on TG4 All-Ireland Final day is the perfect platform to prove that.

Tickets for the TG4 All Ireland finals are available to purchase through the LGFA Office and all GAA ticket outlets or phone: 01-8363156, Email: tickets@lgfa.ie

You can also purchase online via https://bit.ly/3BeD1dO