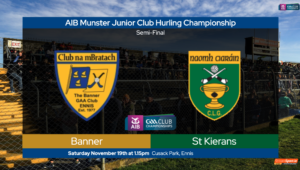 Highlights as a late Donie Nolan point was the difference between @Kieransgaa and @BannerGAAEnnis in today's Junior Semi Final at Cusack Park. @StreamsportI | @AIB_GAA https://t.co/5arbi9GPjv

It took a brilliant 81st-minute point to finally separate two sides that brought so much to a contest that went all the way to extra-time.

Substitute Donie Nolan was the hero for the West Limerick side when with his third point in extra-time he floated over a majestic winner from underneath the shed terrace of Cusack Park. It finally broke the resistance of a Banner side that had county star Shane Meehan to thank for bringing proceedings to the wire.

Meehan hit 0-12 for an Ennis side chasing the game throughout — by half-time he’d hit all their total as they trailed by 0-8 to 0-4 against a much more rounded St Kieran’s side.

At times three men shadowed him, but it allowed others to shine as Danny O’Halloran and Fiachra Hayes landed good scores as they came back from three adrift inside the last ten minutes to force extra-time thanks to Meehan’s late free as the sides finished at 0-12 apiece.

By then St Kieran’s had lost ace marksman and captain Ian Mackessy to injury, but two points by Nolan and another by James Muckell pushed them three clear in extra-time only for three points in as many minutes by Meehan to level matters going into injury time.

Penalties seemed a certainty until Nolan made a hero of himself.