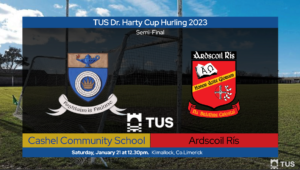 Adam Daly was the match-winning hero for Cashel Community School with his stoppage time point – his fourth in total – ensuring their place for the first time ever in the TUS Dr Harty Cup (U19 AH) final, after they edged past Ardscoil Rís in a nail-biting semi-final at Kilmallock today.

A late Ardscoil Rís goal denied the Tipperary side when these sides met in the group stage. They were level seven times on that October day in Cappamore, and it served as an accurate indication of what to expect at the Limerick venue – level seven times once more on this occasion.

Except for the Ardscoil Rís opening point, Cashel CS were never led in this encounter. They were ahead 0-8 to 0-6 at the break, and subsequently had to sustain a large barrage of pressure from the All-Ireland champions as the North Circular Road school levelled this hugely entertaining game four times in the second-half.

As one would expect with so much at stake, there were mistakes – a wide count of 13 (Ardscoil Rís) to 10 – but regardless of that statistic, Cashel CS celebrated wildly at Cathal McAllister’s final whistle.

Significant contributions came from every line of the field. Jack Quinlan and Ger O’Dwyer were excellent in defence. Joint-captain Ronan Connolly angled over some really difficult frees. Goal-scorer David McGrath and Adam Daly sparkled in attack, while number 12 Oisin O’Donoghue starred as an extra-defender.

It was a devastating loss for Liam Cronin’s Ardscoil Rís, but credit their opponents whose undeniable hunger was a key element in victory.

Cashel CS, managed by Brendan Ryan, took a narrow lead 0-4 to 0-3 after the first quarter. Free-taker Ronan Connolly split the posts three times from different angles for the advantage.

They stretched the gap to three by the 20th minute, Adam Daly stood out as he registered a couple.

Ardscoil finished the half with a brace from Michael Collins – important scores that cut the deficit, 0-6 to 0-8.

And their play improved upon the restart, a Marc O’Brien point leaving just one between them.

But when joint-captain Ben Currivan set up David McGrath in the 35th minute, he finished sublimely for the only goal of the hour, 1-8 to 0-7.

Unfazed, Ardscoil Rís cancelled out the major with three unanswered points. It was left to free-taker Fintan Fitzgerald to tie matters, 0-11 to 1-8 in the 49th minute. As well, Cashel CS Ciarán Byrne produced an outstanding save when he cleared the sliotar off of his own line.

When another defender Ciarán Byrne and Fitzgerald exchanged points (1-11 to 0-14), it appeared extra-time might be required.

But Daly popped up for the winning score in the 62nd minute.