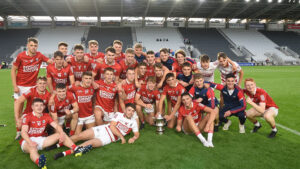 Cork defeated Limerick by 1-26 to 1-24 in the Munster Under 20 Hurling Championship Final on Wednesday July 28th at Páirc Uí Chaoimh.

Cork added more U20 silverware to the county’s trophy cabinet when overcoming Limerick in this evening’s Munster U20 final.

The hard-earned two-point win means Cork are now just one hour from successfully defending their All-Ireland crown, the All-Ireland final against Galway to be played the weekend after next.

Having stretched a two-point interval advantage out to six with eight minutes of regulation time remaining, thanks largely to four points from play from the outstanding Darragh Flynn, Cork appeared to be home and hosed.

But credit to Limerick who came roaring back into proceedings and hit 1-3 on the bounce to level matters as the clock ticked towards the hour mark.

Crucially, though, the Treaty never snuck their noses in front thereafter, with Limerick centre-forward Cathal O’Neill sending wide a critical free on the hour mark.

Cork seized on this let-off and went back in front following points from Padraig Power and Flynn, Cork’s two best performers on the night, who contributed 1-7 between them.

Sub Ben Cunningham made sure of the win with his second on 64 minutes.

Cork, playing into the teeth of a stiffish breeze in the opening period, led 1-13 to 0-14 at the break. This two-point advantage had its foundation in Cork’s growing dominance approaching the break, the hosts outscoring their visitors by 0-7 to 0-3 between the 22nd minute and the call for half-time.

After Cathal O’Neill and Diarmuid Hegarty had thrown over successive points to move Limerick three in front on 21 minutes, the latter score coming about from a poor Daniel Hogan pass, Cork stepped up their efforts.

Their decision-making and transfer of possession improved notably, their superiority under the Limerick restart resulting in the white flag being raised with far greater frequency at the City End.

Two O’Neill frees at the other end, either side of a Flynn placed-ball, temporarily returned the Treaty youngsters in front, but there followed four without reply from Pat Ryan’s charges to move Cork into a 1-13 to 0-13 lead.

Half this quartet was supplied by the excellent Power, who also provided the Cork goal two minutes in.

Limerick had recaptured the lead by the first water break – 0-8 to 1-4, thanks in the main to four O’Neill frees. He finished the half with nine placed-ball efforts to his name, with Cork free-taker Flynn tallying seven during a stop-start opening period that was devoid of any real fluency or bite.

The second half picked up pace considerably, with Cork the ones still standing at the finish. This win sees them join Tipperary at the top of the Munster roll of honour with 21 titles each. 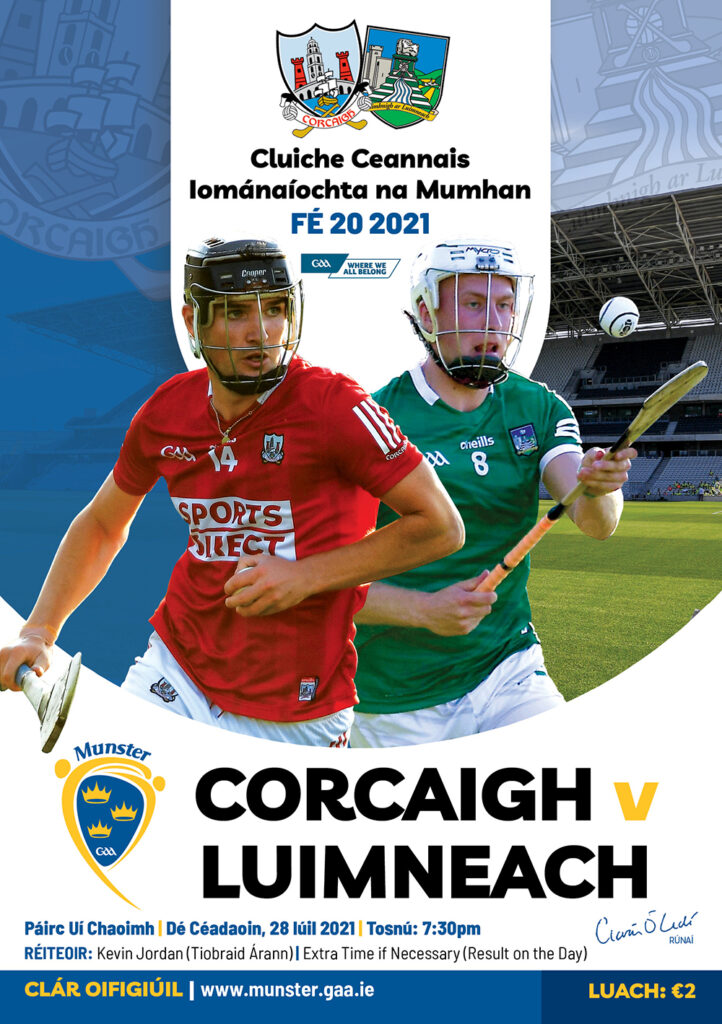 The Munster Under 20 Hurling Final Match Programme will be available to purchase at Páirc Uí Chaoimh tonight for €2.

Cork u20 team to play Limerick in the final on Wednesday at 7:30pm. The game is live on TG4 pic.twitter.com/st75AXj9mK

Limerick Under 20 Hurling Team to play Cork in Munster Final is selected https://t.co/SKxgkmATcn