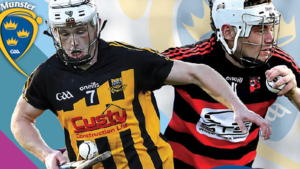 Ballygunner (Waterford) defeated Ballyea (Clare) by 3-20 to 2-6 in the AIB Munster Club Senior Hurling Championship Quarter-Final on Sunday November 28th at Cusack Park Ennis before an attendance of 1,615.

Report by Christy O’Connor for the Irish Examiner newspaper

The game was deep in garbage time when a match that had failed to spark was suddenly — both literally and metaphorically — lit up.

After Niall Deasy drove a penalty to the corner of the net, a horde of young Ballyea supporters behind the goal lit a flare which illuminated the gray backdrop of the afternoon.

As the flare was fired onto the pitch, it caught fire, and thick plumes of smoke began billowing across the goal. By that stage, Ballyea had turned over the puckout and won another close-in free. As the Ballygunner defence lined up for the expectant shot, Deasy played it short to Martin O’Leary, who buried it.

Those goals were only academic in the wider context of the match, but it was the first time all afternoon that the Ballyea supporters had reason to find their voice.

Nobody was getting carried away or anticipating a Lazarus-type comeback but, in any case, Ballygunner immediately went about suppressing any such notions with ruthless intent.

Another goal from Billy O’Keeffe, followed by a handful of points, saw the contest extinguished as quickly as the fast-burning flare had been.

Before a crowd of 1,615, Ballyea will be extremely disappointed with this display, particularly given their recent history and quality of performance in this competition, but this was all about the Waterford champions.

From the first whistle, they were slicker, sharper, more cohesive, and absolutely dominant throughout, both with and without the ball.

Ballygunner manager Darragh O’Sullivan expressed his concern last week about their eight-week layoff since the county final, but O’Sullivan also mentioned the benefits of coming into this match fresh. Ballygunner were hungry, and right at the pitch of the match from the word go, always looking to keep the tempo, pace, and energy of their game high.

Ballyea had physically dominated Inagh/Kilnamona in the Clare final, especially on puckouts and at the breakdown, but Ballygunner completely denied them that platform by playing with such ferocious intensity. The excellent surface of the Cusack Park pitch also suited their style, but Ballygunner still bossed the physical battle.

Their skill execution and decision-making was on a completely different level. They were always able to find the right out-ball or dink-ball to extricate themselves from any Ballyea headlocks in the middle third, while their movement up front was constantly of high quality.

Their set-up on their own puckouts, especially their timing and ability to create space, further underlined the professionalism and experience of this squad.

Scoring 3-20 in late November is an impressive return, but that total could have been far higher again. Ballygunner only had a 56% conversion rate from 41 shots. They could have had three more goals only for three excellent saves from Ballyea’s Barry Coote. Dessie Hutchinson, who had torn up the Waterford club championship, didn’t score; he did win a free and had an assist while one of Coote’s saves came from his goal effort in the first half.

Ballyea had been used to dominating possession, but they were living off scraps here and could never establish any rhythm or fluency to their play. After getting off 39 shots in the county final — which was even more incredible in the absence of Tony Kelly — Ballyea could only manufacture 17 shots. Only six of those were from play, and their only two scores from play came after the 50th minute.

The game was long over as a contest by then, becoming more of a book-keeping exercise by the middle of the second quarter. Ballygunner had their first goal in the ninth minute from the excellent Mikey Mahony, which came directly off an O’Keeffe puckout.

“We knew we had to get a good start,” said Mahony, who was the TG4 Man of the Match. “We had a six-week break, so we could have easily been caught on the hop. We got a goal early. We got a good few tackles in early, which really set the tone.”

Ballyea could never get a foothold in the face of that dominance. Of their 12 turnovers in the first quarter, 65% of that possession was ball hit into their forward line, much of it aimless, which was gobbled up by the Ballygunner defence.

Ballyea did heed those lessons in the second quarter, when only turning the ball over six times, only twice with possession hit into their attack. But they still couldn’t get the scoreboard moving, only converting one of their six shots in that second quarter.

Ballygunner led by 1-8 to 0-3 at half time and, while Ballyea had the first score inside the opening minute of the second half from a Deasy free, the Waterford side replied with eight unanswered points to leave them ahead by 1-16 to 0-4 at the second water-break.

They treated the concession of those two late goals like an insult and then went on to scold Ballyea for their insolence.

After eight county titles in succession, this team has long had a higher level of ambition. Another Munster title and a first All-Ireland are clearly within their sights but, for now, the process just takes them on to a date with Loughmore-Castleiney in two weeks.

“We take every game as it comes. Hopefully the same again for us now in two weeks.”

The same again will take some stopping.

🗣 ' We're absolutely thrilled, we're back in the semi-final of the Munster championship again.'@TomasORuanaidh caught up with an ecstatic Darragh O'Sullivan following Ballygunner's victory over Ballyea. 👇@AIB_GAA | #TheToughest

Sunday’s game will now be shown live on TG4. As a result, the game will not be streamed live by Munster GAA.

A 32 page match programme for Sunday’s game will be available at Cusack Park Ennis at a cost of 3 euro. 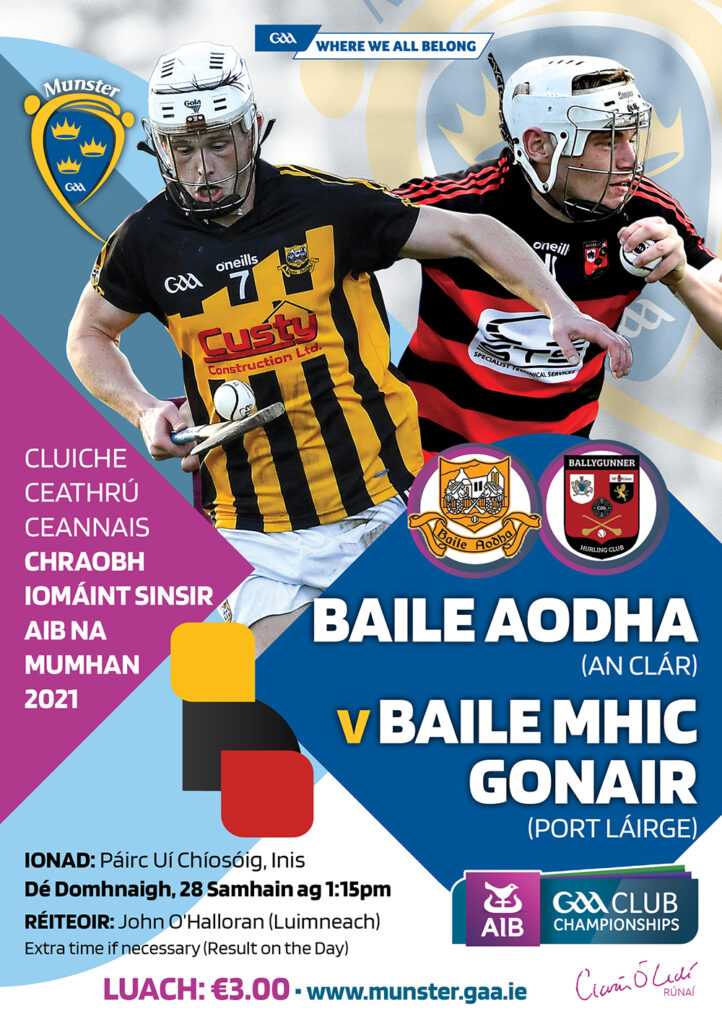 There are three big AIB Provincial Club Championship matches this weekend as well as senior county finals in @TipperaryGAA and @OfficialCorkGAA. #GAABelong