Kerry defeated Cork by 0-17 to 1-9 in the EirGrid GAA Football Under 20 Munster Championship Final on Wednesday March 4th at Austin Stack Park Tralee.

It’s Kerry who have beaten Cork to be crowned Munster u20 football champions for 2020. Watch the Full-Time Highlights here on GAANOW!! pic.twitter.com/LbLK1BtV2Z

The Gaeltacht forward was near unmarkable in the second period, winning three frees, one of which he converted, claiming and converting a mark, while also adding two from open play. His final tally of 0-5 was exactly the difference between the teams at the finish, the hosts completing an nine-point swing having been four behind at the break.

Cork had narrowed the gap to two in the closing minutes, but Kerry finished like a train, three unanswered minors, two supplied by man of the match Ó Beaglaoich, helping them to a 27th title at this grade (formerly U21).

Cork managed just three second-half points, in total, a return that was never going to be good enough to see the county retain their provincial crown.

The third quarter was owned by Kerry, John Sugrue’s charges outscoring their opponents by 0-6 to 0-1. Ó Beaglaoich was outstanding, winning two frees, both of which were converted by Paul Walsh, while also throwing over the lead score when claiming a mark on the 20-metre line.

Mark Cronin was Cork’s sole contributor on the scoresheet for the first 25 minutes of the second period and it was the second of his long-range second-half points which levelled matters at 1-8 to 0-11 13 minutes from the end.

Cork led 1-6 to 0-5 at the break and although the hosts had a certain goal taken off the line by a last-ditch intervention from Cok defender David Buckley, the visitors to Tralee should have commanded a slightly more substantial interval lead.

Keith Ricken’s young charges stuttered with their kicking early on, squandering five point-scoring opportunities inside the opening 10 minutes. Mark Cronin’s 30-metre free came back down off the post, with subsequent efforts from Blake Murphy, Jack Murphy and Cronin all dropping short.

Kerry were that bit more economical, the Kingdom moving into a 0-3 to 0-1 lead 12 minutes in thanks to white flags from Ruaidhri Ó Beaglaoich, Patrick Darcy, and Killian Falvey.

They should have delivered the game’s opening goal after a quarter of an hour, Ó Beaglaoich taking advantage of a slip by Colm O’Shea to move inside the cover. The corner-forward fisted possession across the the squad to the waiting Darcy, but he was far too casual in getting his kick away, the ball stopped on goal line by David Buckley.

Cork were enjoying the greater share of possession and they edged back in front thanks to Jack Murphy and a lovely kick off the left by Cronin. The somewhat subdued Paul Walsh did bring Kerry back level at 0-4 apiece, but then arrived Black Murphy onto stage.

Last year’s centre-forward, having been most quiet for the opening 25 minutes, delivered 1-1 in less than 60 seconds to turn the tie in Cork’s favour. The goal, it must be noted, stemmed from Aodhán Ó Luasa’s turning over of Dylan Casey, with Murphy meandering his way around ‘keeper Marc Kelliher before rolling the ball home. The Cork joint-captain would also kick the last point of the half, his five-minute 1-2 contribution sending Cork back down the tunnel four to the good.

Blake Murphy with a great finish and a great goal for @OfficialCorkGAA. pic.twitter.com/qNrXb5pWQE

It was to prove insufficient in the face of Kerry’s relentless second-half charge.

Adult General Admission: €15
U-16’s: Free
Student/OAP’s will receive €5 concession on full priced tickets at the designated stile prior to entry with valid ID.

Tickets can be purchased from participating Centra and Supervalu outlets.

The Cork Under 20 Football Team to play Kerry in the @EirGrid @MunsterGAA Final has been announced. https://t.co/WhSQSWfRD2 pic.twitter.com/f7x0FPJio9

All-Ireland champions in 2019, the @OfficialCorkGAA U-20 footballers go in search of more silverware when they play @Kerry_Official in Wednesday’s EirGrid Munster Final. #GAA #EirGridGAA #PowertheFuture

The game will be shown live on TG4. 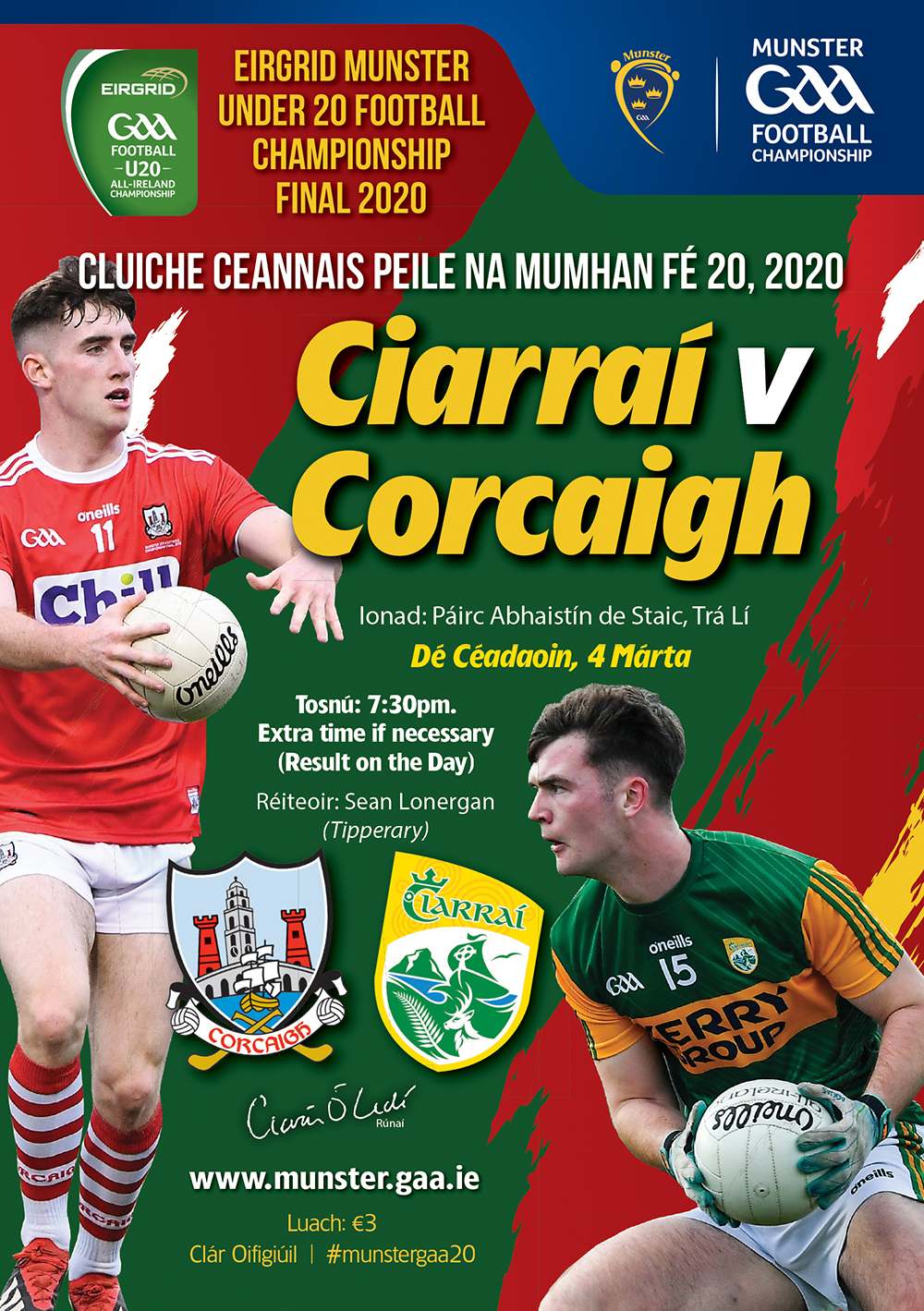