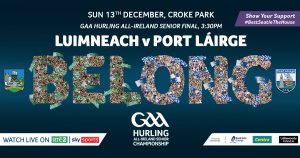 Limerick defeated Waterford by 0-30 to 0-19 in the All-Ireland Senior Hurling Championship Final on Sunday December 13th at Croke Park.

Declan Hannon lifts the Liam MacCarthy Cup as they become the All-Ireland champions for the ninth time in the history #rtegaa #sundaygame pic.twitter.com/lFEwwpjB8w

REPORT: A second All Ireland SHC title in three years was claimed by @LimerickCLG who defeated @WaterfordGAA at @CrokePark #GAA

There was so much to admire in the manner Limerick recaptured the Liam MacCarthy Cup decorating a flawless campaign with a convincing win.

Though defeated, Waterford can reflect on a hugely encouraging stint under Liam Cahill, but Limerick had sufficient expertise to negotiate this hurdle.

It was a physical and furious opening period with Limerick eventually departing at the interval armed with a 0-14 to 0-11 advantage.

Waterford, under duress at various stages, were hanging in there and though they trailed by six as the break approached two Stephen Bennett frees and an Austin Gleeson effort narrowed the gap.

Ultimately that little Waterford burst ensured the issue was delicately poised when the action recommenced, but Limerick had shown some clear signs of their abundant ability.

Indeed another Limerick strength, Kyle Hayes’ running from deep was evident in the 13th minute, but Waterford survived a serious scare.

Stephen O’Keeffe made a splendid double save to thwart Hayes and Cian Lynch, but at the opposite end Waterford were crafting goal opportunities too.

Waterford did suffer a blow in the 21st minute when Tadhg de Burca was forced to limp out of the contest, but the emerging Iarlaith Daly thundered into the match following his introduction.

Jack Fagan had previously flashed a second minute attempt wide, while as the interval approached Stephen Bennett was denied by Nickie Quaid.

Ultimately, though, Limerick were satisfied to retreat protecting a lead, but a fiery Waterford remained very much in the reckoning.

During that dynamic Limerick spell of supremacy Hegarty struck four from play to underline the value and consistency of his 2020 contribution.

Some of those were ambitious attempts, but Waterford were completely aware that the Limerick net needed to be rattled if a daring comeback mission was to be accomplished.

The green and white flag is perched on the hurling summit again.

Get ready for the #GAA Hurling Finals! Take a look at where you can watch them this Sunday below! #BestSeatInTheHouse pic.twitter.com/E3qthUC9Cu

John Kiely has named his team to take on Waterford on Sunday! pic.twitter.com/xzCCTvVXA0

Best of luck to Liam Cahill, his management team and all of the panel! ⚪️🔵⚪️🔵#deiseabú pic.twitter.com/PqcKIrVVvG

PATHS TO THE FINAL