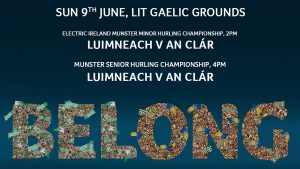 Limerick defeated Clare by 1-28 to 0-13 in the 2019 Munster Senior Hurling Championship on Sunday June 9th at the LIT Gaelic Grounds, Limerick.

All-Ireland champions Limerick are all but guaranteed of a top-three finish in Munster after this 18-point thumping of Clare.

The current state of play is that Tipperary are out front on six points, Limerick and Cork both have four points, while Clare remain on two after this latest hammering. Even if Limerick were to lose away to Tipp next weekend, they’re a sure bet to finish in the top three such is their healthy score difference (+31) by comparison with Cork (+13) and Clare (-30).

From a Clare point of view, they’ll be hoping Limerick take at least a point on their travels to Thurles as a Clare win over Cork would then see the Banner take third spot on a superior head-to-head with John Meyler’s charges. A Limerick defeat would render a Clare win futile such is the latter’s negative score difference.

Clare finished with just three scorers here, Peter Duggan, somewhat incredibly, accounting for all but two of their measly 0-13 total. In total, they hit just four points from play.

Ahead by eight at the break, Limerick gave an exhibition of point-taking in the second-half as the scores rained in from all angles and distances. Five-in-a-row from Graeme Mulcahy, Gillane (0-2, one free), Diarmaid Byrnes, and Tom Morrissey between the 45th and 50th minute left the scoreline reading 0-21 to 0-9 and, from there, there was simply no road back for the visitors. Aaron Gillane capped a fine individual performance with a 60th-minute goal, his final tally climbing to 1-11.

Having endured 13 and 18-point beatings on successive weekends, it is very difficult to see how Clare can turn this around in time for the visit of Cork. Mind you, they simply must. Otherwise, their season is over.

Limerick held a deserved 0-15 to 0-7 advantage at the break, Peter Casey’s injury-time point, which shoved them eight clear going back down the tunnel, meant all six starting forwards had contributed from play.

The half-forward pair of Gearoid Hegarty and Tom Morrissey had both contributed a pair of white flags, while Gillane, as well as throwing over two from play, nailed four frees. The Patrickswell inside forward was proving a major headache for the Clare defence under the dropping ball and it didn’t come as too much of a surprise to see the Banner management switch David McInerney onto Gillane midway through the first-half such was the handful he was making of himself in the company of Banner captain Patrick O’Connor.

The spread of scorers on the Limerick side, which included midfielder Will O’Donoghue and centre-back Declan Hannon, lay in stark contrast to a Clare scoresheet which had only one name written on it. Worse still was that of the seven points struck by Peter Duggan, six were dead-ball efforts. The watch read 30 minutes when Clare managed their sole point from play of the opening half and while Duggan and Conlon were working hard to win a couple of frees, the contribution from the remaining Banner forwards left a fair bit to be desired.

Duggan and Shanagher both had goal chances early on, Declan Hannon and Sean Finn producing timely interventions to keep the green flag rooted in the ground. Both plays ended with Limerick scores and the writing was on the wall as early as the 10th minute, by which time the hosts had surged into a 0-6 to 0-1 lead. The visitors managed to pare the margin back to three by the 21st minute, but no closer would they come.

Stand tickets for this fixture are now SOLD OUT. Terrace tickets remain available at the pre-purchase rate of €15 until midnight on Saturday & will be on sale for €20 at the venue from 12:30pm on Sunday.

The @ClareSenHurlers to face @Limerick in the 2019 Munster Senior Hurling Championship in the @LITgaelicground at 4.00pm on Sunday, 9 June 2019.

Both are on two points after two games, but Limerick have a big advantage in scoring difference, standing at +13 while Clare are -12.

*This will be the 57th championship game between the counties. Limerick won 35 to Clare’s 20 with one draw. from the previous 56.

*Clare were the only team to beat Limerick in last year’s championship, winning by 11 points in the Munster ’round robin’ clash in Ennis.

*Limerick’s final ’round robin’ game will be against Tipperary in Semple Stadium on Sunday week. Clare play their final game against Cork in Ennis on the same day. 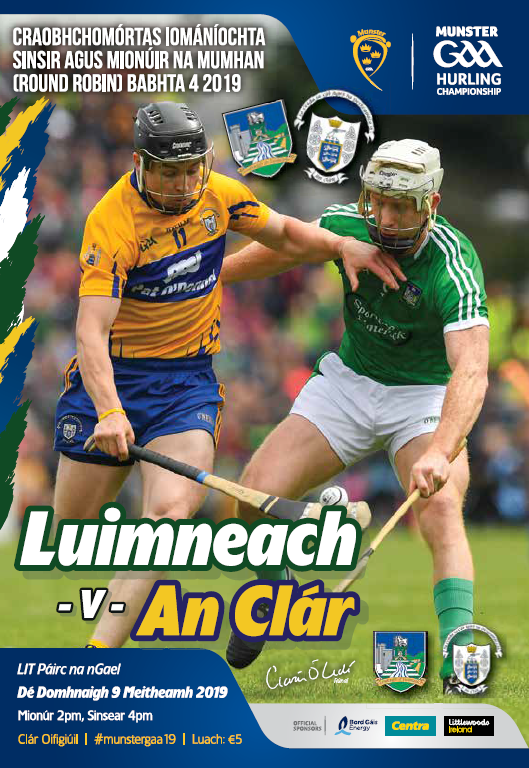