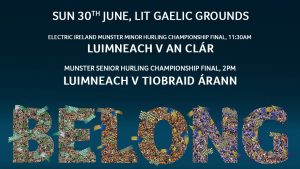 Limerick defeated Tipperary by 2-26 to 2-14 in the 2019 Munster Senior Hurling Championship Final on June 30th at the LIT Gaelic Grounds.

Check out the best action from the Munster Hurling final here! pic.twitter.com/1CKLEHOUyH

Report By Cian O’Connell at the LIT Gaelic Grounds for GAA.ie

These really are successful and silverware laden times for Limerick, who stormed to a Munster Final win which was every bit as comfortable as the scoreline suggests.

Highly competitive initially it surprisingly turned into a rout as the All Ireland and Allianz Hurling League champions impressively bossed affairs in the second half.

Peter Casey’s 1-5, Declan Hannon’s marshalling of the defence, Cian Lynch’s relevance throughout, Kyle Hayes’ and Tom Morrissey’s graft were some of the chief reasons why Limerick ultimately prevailed with plenty to spare.

For Tipperary it was a particularly disappointing southern showpiece with the value and enterprise of the injured Cathal Barrett and Patrick ‘Bonner’, especially, sorely missed.

Early on the sub plots had carried intrigue all over the field. Tipperary’s artistic attack versus a gritty Limerick defence; Ronan Maher’s duel with Gearoid Hegarty; Brendan Maher tasked with the job of minding Aaron Gillane.

It was fast and physical from the outset, but Limerick departed at the break satisfied to be holding a 1-11 to 1-9 advantage following an absorbing first half.

Tipperary enjoyed a decent start edging 1-6 to 0-4 clear in the 18th minute when Seamus Callanan used all his skill to mine an opportunistic goal.

Under some duress Limerick came thundering back clipping the next three scores in a six minute burst trimming the gap to two.

Two Aaron Gillane efforts were sandwiched either side of an effort from Peter Casey, who was causing Tipperary some problems with his perpetual movement up front.

Callanan flicked a 25th minute point when connecting with a mammoth Brian Hogan puckout, but within a matter of seconds Limerick were level.

Inevitably Gillane was an influential figure supplying the delicious assist which enabled Peter Casey to bat the sliotar over the line from close range.

The drama continued until the turnaround with Tipperary grateful to a great Hogan intervention to deny the powerful Hegarty.

Approaching the interval Ronan Maher, still embroiled in a dynamic battle with Hegarty, rifled over a delightful point from distance to restore parity at 1-9 each.

Limerick, though, were satisfied that Tom Morrissey and Diarmaid Byrnes (free) landed scores meaning they went in two ahead, but there appeared few doubts about one thing: the issue remained delicately poised.

So it seemed. Diarmuid Byrnes and Hegarty steered Limerick four ahead, but then Tipperary summoned what proved to be their last meaningful riposte.

Forde clipped a free and it was immediately followed by a John McGrath goal following Dan McCormack’s pass. The teams were tied, 26 minutes were left on the clock, but Limerick refused to be perturbed.

Casey was in sensational form, scoring and creating chances and it was his selflessness which manufactured the decisive goal in the 55th minute.

The Na Piarsaigh forward picked James Barry’s pocket and the marauding Hayes sped through to nail a goal which sent Limerick 2-18 to 2-12 in the ascendancy.

By the time the full-time whistle was sounded Limerick had scorched 12 points clear and thoughts were turning to the rest of their Championship in Croke Park. Reaching that stage is now Tipperary’s brief, but significant blue and gold improvement is necessary if the standard bearers are to be test on that grand stage.

Brian Hogan First Half save for Tipperary

GOAL! What a finish by Peter Casey! pic.twitter.com/DodbDihGsg

Séamus Callanan with a fantastic goal for Tipperary! pic.twitter.com/Kgb34ygmFB

GOAL! John McGrath with Tipperary's second of the match! pic.twitter.com/NOyeTXdVTD

Serious work rate from Kyle Hayes starting with the block and ending with a great finish for Limerick's second GOAL! pic.twitter.com/Hubsag9rpT

Nickie Quaid Second Half Save for Limerick

Congratulations to Peter Casey @LimerickCLG who has been named the @LittlewoodsIRL Man of the Match from today’s @MunsterGAA SHC Final! pic.twitter.com/TSBMPVpzOS

Tickets for this game are now sold out.

For anyone heading to Sunday’s game here’s what you need to know.. Please read carefully. More details at https://t.co/zXgPd1maHh pic.twitter.com/4HPFuzcOdp

They meet in the Munster final for the first time since 2001 when Tipperary won by two points in Pairc Ui Chaoimh. It will be their second meeting in two weeks, with Tipperary having won by four in Semple Stadium in the final series of ‘Round Robin’ games.