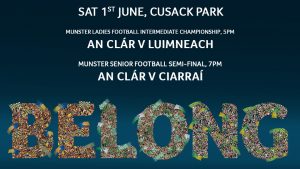 Kerry defeated Clare by 1-15 to 0-12 in the 2019 Munster Senior Football Championship Semi-Final on Saturday June 1st at Cusack Park, Ennis.

Kerry are on course for a seventh successive @MunsterGAA Senior Football title after a deserved six-point victory over @GaaClare at Cusack Park. Here's the #GAANOW highlights! pic.twitter.com/DLTEkQ36Ni

REPORT: Despite a spirited @GaaClare second half performance @Kerry_Official still advanced to another @MunsterGAA SFC Final

Report By Cian O’Connell at Cusack Park for GAA.ie

There was never any sign of a shock in Ennis as Kerry comfortably dealt with Clare’s challenge.

Hope and expectation is attached to every Kerry Championship journey, but Peter Keane’s first summer match in charge of the senior outfit culminated in a win.

Buoyed up by the development of a gifted crop of young footballers Kerry continue to integrate the emerging talent into the senior set-up.

With rain pouring from a grim grey sky this could have been a tricky assignment, but Kerry had the necessary poise and punch up front.

Prompted by Gary Brennan’s industry Clare were highly competitive in the closing stages which only added to the frustration about their disappointing start.

As Kerry dictated the agenda Clare struggled for vast chunks of the opening period and when they entered enemy territory the Banner shot selection was poor.

That was illustrated by Clare’s first half total of 0-3 from 10 shots which captured how the locals were ailing against a Kerry outfit primed for a battle.

Indeed Kerry could have been a little slicker converting themselves crafting five goal opportunities before the break with the Clare net only rattled once.

That arrived in the 33rd minute when James O’Donoghue pounced following a delicious David Clifford assist.

It was one of many moments of class from Kerry’s splendid inside line of Clifford, Paul Geaney, and O’Donoghue, who were all prominent.

While Clare weren’t short on perspiration they initially missed three efforts prior to David Moran landing a seventh minute point for Kerry.

Geaney and Clifford quickly stretched Kerry’s advantage and while David Tubridy eventually struck a Clare score in the 18th minute it was merely a brief interruption.

Kerry clipped five on the spin to edge seven clear and while Eoin Cleary rifled over a neat point for Colm Collins’ charges, the Kingdom riposte was impressive.

Clifford supplied the pass which manufactured just enough space for O’Donoghue, who craved involvement to blast a brilliant goal.

By the time the interval rolled around Kerry’s lead had a healthy 1-9 to 0-3 appearance to it with Clare in considerable distress.

After the restart Clare battled, but Sean O’Shea was sharp from frees for Kerry, who held a commanding 1-13 to 0-4 lead by the 49th minute.

Seven of the next eight scores were registered by Clare, who remained defiant, but Kerry, who had substitute Mark Griffin sent off for a second yellow card offence four minutes from time, weren’t overly fussed, and another provincial decider beckons.

The Clare Senior Football team to play Kerry in the Munster Senior Football Semi Final on Saturday next in Cusack Park @ 7p.m. has been announced.https://t.co/VofgJ7zRyp

Senior Citizens/Students
Receive €5 concession on full price tickets at the designated stile with valid id prior to entry.