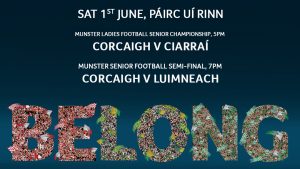 Cork defeated Limerick by 3-18 to 0-6 in the 2019 Munster Senior Football Championship Semi-Final on Saturday June 1st at Páirc Uí Rinn.

Watch as @OfficialCorkGAA booked their place in the @MunsterGAA final after a comprehensive win over @LimerickCLG at Páirc Uí Rinn pic.twitter.com/UQS8oU3uKU

Report By Denis Hurley at Pairc Ui Rinn for GAA.ie

Cork will play Kerry in the Munster SFC final after Ronan McCarthy’s side dominated throughout their provincial semi-final against Limerick at Páirc Uí Rinn.

Three goals in the first 14 minutes, two by Brian Hurley with Ruairí Deane also netting, ensured that the Rebels were put in a commanding position and they enjoyed a 3-8 to 0-2 half-time lead. While the second half lacked the same high tempo that Cork had shown in the opening period, they nevertheless kept the scoreboard ticking over to ensure their place in the decider in three weeks’ time.

With Limerick having beaten Tipperary by seven points in the quarter-final, Cork would have guarded against complacency and targeted a fast start. So it proved, but the Treatymen will rue a goal chance inside the first minute which went begging.

When midfielder Tommie Childs drove forward from the throw-in, he found Seán McSweeney. The corner-forward’s low shot struck the post and then rebounded off the back of Cork goalkeeper Mark White but ball looped up off the crossbar.

The visitors wouldn’t get any more chances to seize the upper hand and Cork took the lead with a free from Mark Collins – the first of nine points for him – before Brian Hurley found the net with a good low finish following Ruairí Deane’s pass.

That was in the fourth minute and the same partnership combined a minute later for a second goal to put Cork in firm control.

The lead stood at 2-4 to 0-0 before Deane added another goal, well set-up by debutant Eoghan McSweeney, who finished with three points. While Cork did endured 12 minutes without a score – including a missed penalty as Hurley’s effort struck the post – and Limerick got off the mark with a pair of Séamus O’Carroll points, the 15-point interval advantage remained healthy.

Three more Collins points on the resumption extended the advantage and Cork continued to add to their tally, with Ian Maguire, Matthew Taylor and sub Stephen Sherlock all scoring. Limerick goalkeeper Donal O’Sullivan kicked three second-half points from long-range dead balls, but Cork finished well to enjoy a 21-point advantage at the end.

Senior Citizens/Students
Receive €5 concession on full price tickets at the designated stile with valid id prior to entry.

Video – Today #PlayersWishList is combined! Check out who wants to play alongside John Galvin.