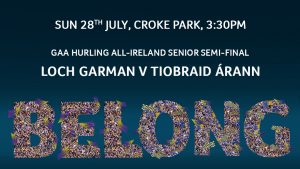 Tipperary defeated Wexford by 1-28 to 3-20 in the GAA Hurling All-Ireland Senior Championship Semi-Final on Sunday July 28th at Croke Park.

Tipperary beat Wexford in a classic at Croke Park to book their place in the All-Ireland SHC final where they will face Kilkenny! Watch the best highlights here on GAANOW pic.twitter.com/rhu0t8GGkU

No silverware was won, but this All-Ireland semi-final victory will go down in the annals of Tipperary hurling history as one of the great days.

Reduced to 14 men and trailing by five points when Lee Chin goaled for Wexford on 49 minutes, it was easy believe we were witnessing the closing act for a generation of Tipperary hurlers who won All-Ireland medals in 2010.

Wexford had just scored an unanswered salvo of 1-4 and looked to be the team with all the momentum.

But then a group of Tipperary hurlers that have had their character questioned more than once in the past proved beyond doubt that they are made of the right stuff.

Led by the Maher brothers, their defenders started began hurling with guts and gumption that then spread like a contagion to every line of the Tipp team.

A blue and gold jersey seemed to emerge from every ruck and 50-50 challenge with the ball, and the Tipp forwards ran their legs to stumps to create space and scoring opportunities even though they were outnumbered by Wexford defenders.

Even when they were hit with a sucker-punch of a goal on 61 minutes after working so hard to level the match their self-belief never wavered.

Nor did it when Jake Morris thought he had scored a match-winning goal only for the play to be brought back for a free in instead.

Tipperary simply refused to accept any result other than a heroic victory, and in the final 25 minutes of the match outscored Wexford by 0-12 to 1-2 to run out winners in dramatic fashion.

It would have been hard to credit that outcome when Wexford held that five-point advantage in the second-half, because up to then Davy Fitzgerald’s team had done so much right.

They were the better team in the first-half when their hard-running and intelligent passing and support play pulled the Tipperary defence all over the place.

But such was the energy they expended with that approach in the first 50 minutes of the match that it seemed as though they ran out of gas in the final 20 minutes of normal time and six of injury-time.

A number of Wexford players went down with cramp, and perhaps the mental pressure too of seizing the moment and reaching the county’s first All-Ireland Final since 1996 weighed heavily on them.

That was surprising, because until Tipperary’s second-half surge sowed doubts in their mind, Wexford looked in no way unnerved by the magnitude of the occasion.

They were 0-4 to 0-1 ahead after the opening exchanges, and when Seamus Callanan lashed a brilliant ground-stroke to the net for Tipperary on ten minutes the goal came very much against the run of play.

Seamus Callanan pulls on the sliothar and hits a bullet of a goal for @TipperaryGAA!! pic.twitter.com/AnRPL8CWix

Whenever Wexford ran from deep they carved their way through Tipperary with impressive ease, and some of their attacking moves were a joy to behold.

Their 25th minute goal was a case in point, Shaun Murphy picking out Conor McDonald with a nice cross-field ball and the Naomh Eanna man finishing clinically.

A scoring surge from Tipperary that saw Noel McGrath, Man of the Match Ronan Maher, and Seamus Callanan land points in quick success gave the Premier County some badly needed momentum, but Wexford still looked the more convincing team in most departments and led at the break by 1-14 to 1-12.

Tipperary started the second-half with their tails up to move 1-16 to 1-15 ahead, but then it looked like their challenge had imploded when John McGrath was sent-off after earning a second yellow-card for a rash pull on Damien Reck.

Wexford went for the jugular, as Rory and Jack O’Connor pointed before Lee Chin raced through and hit a low shot to the Tipperary net that Brian Hogan will probably feel he should have stopped. Wexford looked entirely capable at that moment of winning the match handsomely, but Tipperary had other ideas.

Points from Callanan, Forde (2), John O’Dwyer and Ger Browne drew them level, before Wexford seemed to have quelled the rebellion when McDonald struck for his second goal.

Tipperary’s strength in depth has been questioned, but Kehoe, Ger Browne, Willie Connors, and Jake Morris all scored after their introduction and did some very important work in general play too.

It was Connors who levelled the game up on 69 minutes before Morris looked to have struck a decisive blow when he fired the ball to the back of the net, but referee Sean Cleere called play back for a free in to Tipp which Jason Forde clipped over to give them the lead.

Forde then landed a ’65 to put Tipp two clear before a Lee Chin free on 74 minutes left the minimum between the teams again.

There were still two minutes of injury-time to play, but Wexford couldn’t find a way past Tipperary’s inspirational defence to land an equaliser.

Instead it was Morris who had the last say, as he landed a sublime point from the sideline to seal a famous win for Tipperary.

Jake Morris puts the nail in the coffin with this catch and point! Superb performance by @TipperaryGAA pic.twitter.com/pf90BIe6CE

An impressive Kilkenny await in the Final, but after this victory the Tipperary hurlers will surely believe that anything is now possible.

'I've a very small job to do in all this' – Tipperary boss Liam Sheedy hails the effort of his players after their All-Ireland semi-final win. Watch the highlights on @RTE2 at 9.30pm #rtegaa pic.twitter.com/RFE2iqkhLD

There promises to be no shortage of @CrokePark hurling drama this weekend!

Ahead of the meeting of Wexford and Tipperary in the All-Ireland SHC semi-final, @MartyM_RTE gets the views of managers Davy Fitzgerald and Liam Sheedy, and former All-Stars @larcorbett and Tom Dempsey #GAA pic.twitter.com/foROdcZqxc

The Tipperary team to play Wexford in the All-Ireland Senior Hurling Championship Semi-Final on Sunday next, July 28th, at 3.30pm in Croke Park has been announced by manager Liam Sheedy https://t.co/vqKOZt2PHe

Heading to @CrokePark this weekend? Please be aware of the following road traffic information that may effect your journey on the M7 pic.twitter.com/ApLeerYAJ8