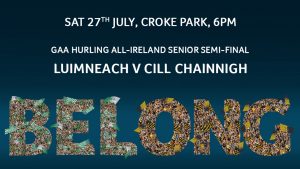 Kilkenny defeated Limerick by 1-21 to 2-17 in the GAA Hurling All-Ireland Senior Championship Semi-Final on Saturday July 27th at Croke Park.

It was always going to take something to dethrone this Limerick team and Kilkenny produced it after an epic All-Ireland semi-final in Croke Park today.

They were clinging on by their finger-nails at the end, but they were the better team for most of the match and were deserving victors overall.

This was the 16th All-Ireland semi-final that Brian Cody has won as Kilkenny manager, but few will have tasted as sweet as this one.

His team made light of their underdog status to take the match to Limerick from the very first whistle, and played throughout with the sort of work-ethic and character that Cody has always put such a premium on.

We’ve grown accustomed to this Limerick team dominating the physical exchanges, but in this match they were given a dose of their own medicine.

The sight of multiple Kilkenny players swarming around a Limerick ball-carrier like angry wasps and often forcing turnovers was a common one throughout.

Coming into this match the Limerick full-back line of Sean Finn, Mike Casey, and Richie English had rightly earned many plaudits for the forcefulness of their defending, but Kilkenny really hammered the hammer.

Colin Fennelly and Adrian Mullen scored a combined 1-7 from play, and generally caused chaos whenever the ball was sent their way.

Limerick just weren’t allowed to hurl with the same sort of fluency they did in the Munster Final, and a wides tally of 15 was symptomatic of the pressure their shooters were being put under.

Perhaps there might have been an element of rustiness from the four-week lay-off since their provincial final win, because right from the start they struggled to cope with the pace that Kilkenny set.

Brian Cody’s team led by 0-6 to 0-1 after 10 minutes with TJ Reid and Walter Walsh particularly prominent in this period of the game.

Fennelly and Mullen might have been Kilkenny’s top scorers from play, but Reid was arguably the most influential player on the pitch.

Time and again desperate Limerick defenders were forced to foul him, and Reid punished them every time from placed balls. Limerick were really feeling the heat when Colin Fennelly scored the first goal of the match after 17 minutes.

He gathered a driven Eoin Murphy puck-out and charged past Sean Finn before batting the ball past the advancing Nickie Quaid. Reid followed up with a free, and Kilkenny were 11 points to the good.

Bit by bit, though, Limerick were starting to get at toe-hold in the game. Aaron Gillane and Graeme Mulcahy were willing outlets in attack, and their defenders eventually began to find a way to spoil the free-flowing Kilkenny attack.

They out-scored Kilkenny by 0-7 to 0-3 in a 12 minute spell and grasped a real life-line when Aaron Gillane was fouled for a penalty by Huw Lawlor on 37 minutes and then smashed it to the back of the net himself.

Richie Hogan replied with a point for Kilkenny, but their three-point half-time lead – 1-12 to 1-9 – seemed paltry considering their dominance.

You expected Limerick to find another gear in the second-half but, no matter how hard they tried, they could never quite manage to overtake Kilkenny.

A point from Barry Nash reduced the deficit to the minimum by the 51st minute, but Kilkenny then scored the next four points of the match as Mullen and Fennelly continued to run riot.

By this time Gillane had been subdued by Lawlor and a Limerick revival seemed unlikely, but then Shane Dowling scored a brilliant goal that ensured we would have a grandstand finish.

David Reidy reduced the gap to the minimum and then very nearly did something even more dramatic when he raced through on goal only to see his driven shot brilliantly saved by Kilkenny goalkeeper Eoin Murphy.

Kilkenny’s lead was still just a single point with three minutes of injury-time remaining, but they battled their hearts out to preserve it until referee Alan Kelly finally blew his final whistle.

There promises to be no shortage of @CrokePark hurling drama this weekend!

WATCH: John Kiely has named the @LimerickCLG side to take on @KilkennyCLG in Saturday's All Ireland Semi Final at @CrokePark pic.twitter.com/dAgFdXXToY

Heading to @CrokePark this weekend? Please be aware of the following road traffic information that may effect your journey on the M7 pic.twitter.com/ApLeerYAJ8