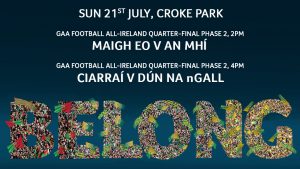 Kerry drew with Donegal on a scoreline of 1-20 to 1-20 in Group 1 Phase 2 of the GAA Football All-Ireland Senior Championship on Sunday July 21st at Croke Park, Dublin.

Report By Chris McNulty at Croke Park for GAA.ie

When they finally drew breath on a pulsating afternoon a headquarters, there was nothing to separate Donegal and Kerry.

During a breathless finale Michael Murphy free was the last act of an eventful contest that might have swung either way.

It was Murphy who netted the 52nd minute penalty that helped Donegal recover from the body blow of a Paul Geaney goal for Kerry on 44 minutes that threatened to derail Declan Bonner’s depleted charges.

Ciaran Thompson and Caolan Ward got their wires crossed and Geaney was on the loose ball like a flash. Geaney surged in to beat Shaun Patton with a fine finish to the bottom corner of the Hill 16 net.

Two Murphy frees – both of which the Glenswilly man converted from around 50 metres – had just put Donegal in front for the first time since the 10th minute when Geaney’s goal arrived like a dose of smelling salts.

Murphy tucked home a penalty after Daire Ó Baoill was fouled by Stephen O’Brien to put the Ulster champions in front and they were denied a second goal almost immediately, Eoin McHugh’s effort chalked off for a square ball infringement.

Donegal were rocked when 2018 All-Star nominee Eoghan Ban Gallagher broke an ankle in training during the week and there were further blows as 2012 All-Ireland winning duo Neil McGee and Paddy McGrath were unable for the trenches here.

Patrick McBrearty kicked a brace of classy points to bring Donegal level as the game inched towards the interval, but Seán O’Shea’s third free of the day put Kerry ahead, 0-10 to 0-9, at the changeover.

Kerry – who were minus the services of David Moran – will have felt as though they could have been further in front, though, as two goal chances came and went for the Kingdom.

Shaun Patton denied David Clifford with a deft touch around the post after he sped onto an O’Shea pass, while Paul Geaney couldn’t keep his shot down after the chances opened when Patton punched clear into David White’s path.

Donegal hung in for long spells of the first half before Michael Murphy – who was making his 150th appearance for the county – levelled things up.

Ryan McHugh shone for what appeared a makeshift Donegal and his two fine attempts helped narrow the margins before Murphy knocked over with his left foot.

Geaney pushed the chips towards Kerry, but Donegal – guided by a wonderful Ryan McHugh display – went all in and Murphy rescued a share of the spoils for Declan Bonner’s men.