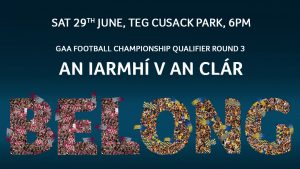 Clare defeated Westmeath by 1-13 to 0-15 in the GAA Football All-Ireland Senior Championship Round 3 on Saturday June 29th at TEG Cusack Park, Mullingar.

It was a close match between @westmeath_gaa and @GaaClare at the weekend at TEG Cusack Park! Watch the highlights on GAANOW to see how Clare came out one point ahead! pic.twitter.com/jAaJ57Ikyc

REPORT: @GaaClare had to dig deep to defeat @westmeath_gaa in a hard-fought All-Ireland SFC Round 3 Qualifier at TEG Cusack Park in Mullingar.

Experienced duo David Tubridy and Gary Brennan rose magnificently to the occasion for Clare in Mullingar as the Munster men moved within one more win of the All-Ireland quarter-final group stage.

Level seven times in a tense and intriguing Round 3 qualifier at TEG Cusack Park, Clare struck for a crucial 47th minute goal through Tubridy which put them into a lead they would hold onto.

Tubridy added two more points from frees though hosts Westmeath refused to throw in the towel and with just a point in it late on, the interventions of ex-Ireland hero Brennan were crucial as he twice rose up to pick high balls out of the sky for Clare.

Clare, who battled gamely against Kerry in the Munster championship, will return to action next weekend in a Round 4 qualifier when they will play a beaten provincial finalist.

It’s the end of Westmeath’s Championship campaign and they will feel particularly unlucky to have lost key duo John Heslin and Ger Egan so early in this game.

Heslin picked up a black card just minutes into the contest while Egan was taken off with an injury that forced the team to adjust and think on their feet.

Westmeath came into the contest chasing their third qualifier win over Munster opposition this summer after wins over Waterford and Limerick.

They were initially boosted by the inclusion of Heslin who sat out the Waterford game and only came on against Limerick following hamstring trouble.

Heslin lined out at midfield before moving into the centre-forward position but left the field after just seven minutes following that black card.

It was a giant blow to Westmeath and they lost another former captain when Egan crumpled in a heap with a leg injury after 15 minutes.

The team’s inspirational leader this year had to be replaced and to make matters worse a third forward, Ronan O’Toole, was black carded in the 21st minute.

Clare supporters who made the trip to the midlands could scarcely believe their good fortune and roared their approval as the team raced 0-4 to 0-1 clear.

Westmeath, in the circumstances, might have folded but fought back to level it at 0-4 apiece before edging a point ahead in the 20th minute.

It was an impressive show of character from a depleted side that went through four different free-takers in the first-half alone; Egan, Tommy McDaniel, Callum McCormack and Kieran Martin.

Captain Martin rose to the occasion with three first-half points though Clare oozed quality at the other end when they attacked.

The 2016 All-Ireland quarter-finalists were level with Westmeath on six different occasions in the first-half with Jamie Malone, Cathal O’Connor and Gary Brennan pinching some terrific scores.

The sides were tied at 0-8 apiece at the interval in a tense and enjoyable tussle that looked set to go right to the wire.

But the game turned decisively in the 47th minute when Clare – with the scores tied again at 0-9 to 0-9 – struck for 1-1 without reply.

Eoin Cleary converted a free first of all and then got a hand to the resulting kick-out, diverting the ball into the path of Gavin Cooney who played in Tubridy for a goal.

Suddenly, Clare possessed a commanding 1-10 to 0-9 lead and while Westmeath fought hard late on with Martin taking his tally to 0-6 by full-time, the home team just couldn’t reel in the Banner who held on for a memorable win.

They meet for only the second time in the championship, having previously clashed in the 2005 Round 2 qualifiers when Clare won by 0-12 to 0-9 in Ennis.