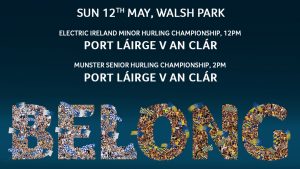 Clare defeated Waterford by 0-17 to 0-15 in the 2019 Electric Ireland Munster GAA Hurling Minor Championship on Sunday May 12th at Walsh Park, Waterford.

Report By Tomás McCarthy for the Irish Examiner newspaper

Late points from Conner Hegarty, Dylan Downes and Keith Smyth saw Clare over the line in a tight and tense curtain raiser in Walsh Park that was level seven times.

The Banner inside forwards produced 0-12 between them. All six members of their attack got on the scoresheet in open play. The sides were level four times in the first half. Tipperary referee John McCormack blew the whistle for twenty frees. Waterford led 5-3 after eleven minutes.

Reuben Halloran, who opened the scoring with a long range free, fired a penalty over the bar. After that let off, Clare warmed to the task with captain Cian Galvin acting as a seventh defender. The visitors got their noses in front on 22 minutes with lively inside men Conner Hegarty, Diarmuid Cahill and Keith Smyth all on target. Waterford keeper Rian Hogan also saved a stinger from Smyth. Banner wing back Tony Butler put them 8-6 up. Waterford only managed two points from play in the opening half. Six Aaron Ryan efforts (five frees) left them just one down at the break (0-10 to 0-9).

Waterford made a double switch at half time and were back in front within nine minutes through two Ryan frees. Jamie Gleeson, younger brother of Austin, added another from play (0-12 to 0-10). Clare struck the next three via Oisin O’Donnell, Smyth and Cahill to sneak in front again.

Johnny Burke levelled matters for the seventh and last time. Late singles from Hegarty (2) and Downes gave the Banner breathing space. Burke and Ryan shaved the arrears to one deep into injury time before Smyth sealed a valuable win on the road for the young Clare men.

The Waterford Minor Hurling Panel to face Clare this Sunday in Walsh Park has been announced!

Best of Luck to Daragh Duggan, his management team and all the panel! #deiseabú #GAABelong
⚪️🔵 pic.twitter.com/84kMssggfa