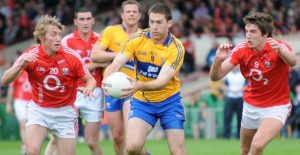 Cork eased to their 37th Munster GAA Football Championship with a clinical defeat of Clare at the Gaelic Grounds on Sunday afternoon. The Rebels hit three goals in the first half and led by 3-7 to 0-7 at the break, before Clare shored up their defence in the second half and made a far more competitive game of it. Remarkably, all of Cork’s scores came from play, while all six of their starting forwards hit the target from play, as did Daniel Goulding and Barry O’Driscoll, who were brought on in the second half.

While the Rebels had a three-goal cushion at the break, the first half wasn’t as one-sided as the scoreline suggested. Cork were simply far more clinical in front of goal while Clare were guilty of missing a number of goal chances. Cork moved two points clear in the early stages, with Aidan Walsh and Ciarán Sheehan getting off the mark in the first five minutes. Nicholas Murphy started at full-forward for the Rebels and was a constant threat on the edge of the square, creating a chance for Donncha O’Connor on 10 minutes, which Gordan Kelly, the Clare defender, did brilliantly to block.

Clare had early points from David Tubridy and Rory Donnelly, but they were hit with a sucker punch when Fintan Goold fired the Rebels’ opening goal on 13 minutes, finishing clinically after Walsh and O’Connor had combined well to create the chance. Two Michael O’Shea scores, the second after Tubridy was denied by a last-ditch block, brought the gap back to three points, but the excellent Walsh then hit Cork’s second goal on 21 minutes, finishing smartly after a powerful run through the Clare defence. Cork were absolutely clinical in the first half, while Clare spurned a number of goal chances, Gary Brennan dragging a shot wide, while Cork centre back Eoin Cadogan was yellow carded for a foul which Tubridy then converted.

Cork snaffled another goal before the break, as Paul Kerrigan pierced the Clare defence and laid the ball off for Murphy to fist into an empty net, helping the Rebels to a 3-7 to 0-7 half-time lead. That lead was extended to 11 points within four minutes of the restart, Sheehan and O’Connor both hitting the target from play early in the second half. When it looked like the Clare challenge would crumble, Micheál McDermott’s charges hit back with the next three scores, Tubridy, O’Shea (his fourth), and Donnelly all reducing the arrears to 2-9 to 0-10 by the 47th minute. But Cork were in no mood to be generous and two quick-fire scores from the excellent Colm O’Neill, who finished with four points from play, ended any hopes of an unlikely comeback. Clare remained competitive in the closing stages, but Cork were the far superior side and coasted home to a 12-point win, with O’Neill, Goulding and O’Driscoll adding a coat of gloss to the scoreline late on.

From the RTE.ie web site

Conor Counihan’s Cork defeated Clare by 12 points, 3-16 to 0-13, in this afternoon’s Munster senior football final at the Gaelic Grounds. As predicted, the National League champions were much too powerful for Clare, appearing in a first senior provincial decider since 2000. First half goals from Fintan Goold, Aidan Walsh and Nicholas Murphy helped Cork to lead by 3-09 to 0-09 at half-time. And while Clare matched Cork point for point for most of the second half, the end result was never in doubt. This was Cork’s 37th provincial senior title victory in all – and a first since 2009. 9,139 spectators were present to watch the first Munster SFC final meeting between Cork and Clare since 1949.

But on the 20th anniversary of the Banner County’s shock provincial final victory over Kerry, there would be no repeat as a slick Cork outfit, while never hitting the high notes, advanced comfortably to the All-Ireland SFC quarter-finals. Goold bagged Cork’s opening goal in the 14th minute, crashing a stunning drive past Clare goalkeeper Joe Hayes. Seven minutes later, Walsh rampaged through midfield and beat Hayes with a low shot for Cork’s second goal.

And it was game over three minutes before half-time when Murphy fisted home a Paul Kerrigan handpass in the nick of time. Murphy was on the Clare goalline when he made contact and if Kerrigan’s pass had travelled all the way into the net, it would have been disallowed. TV replays showed that it was a marginal call – but Murphy, who has made a big impact in his new full-forward role – got the benefit of the doubt and Cork went on to lead at half-time by nine points.

All six of Cork’s starting forwards were on target in this clash and the Rebels scored everything from play as Clare were simply outclassed in a disappointing encounter. Cork’s physical superiority all around the field proved crucial to this win but Clare’s inside forwards looked dangerous whenever they gained possession. Michael O’Shea scored four points from play while Rory Donnelly added 0-03 as Clare refused to wave the white flag of surrender.

Better decision making in front of goal could have seen Clare score a goal or two as Gary Brennan drove his team forward from midfield. And Cork had goalkeeper Alan Quirke to thank for a ‘clean sheet’ as the Valley Rovers netminder kept out Clare sub Niall Browne with a point blank save in the closing minutes. Cork’s starting line-up showed two late changes as Graham Canty and Patrick Kelly were replaced by Eoin Cotter and Goold. But the reshuffle proved seamless and Counihan has an embarrassment of riches to choose from – with many pundits having installed Cork as favourites for this year’s All-Ireland title. They’ll receive much stiffer tests than this but the worry from Cork’s perspective is that they’ll have to wait a month for an All-Ireland quarter-final – and that’s the stage where Cork were shocked by Mayo last year.

Clare show two changes in personnel from the team that lined out against Limerick in the Semi-Final. Barry Duggan (Cratloe) comes straight in at full back ,instead of Shane McNeilis, for the first time this year. Barry did not line out for Clare during the Allianz Football League campaign. Into the side also comes Shane Brennan, (Clondegad), who was introduced as a substitute against Limerick, Enda Coughlan , who lined out at centre forward against Limerick, now reverts to Right Half back. With Martin McMahon on the bench. Shane McGrath lines out at centre forward, where he has played most of the National there. Alan Clohessy will captain the Clare team, as they contest there 17th Munster Football Final. 1949 was the last time they played Cork in a Munster Football Final .

The Cork Senior Football team to play Clare in Sunday’s Munster Final at 2pm at the Gaelic Grounds, Limerick, will line out as follows:

Student/OAP – Concession on Stand Tickets only – pay full price and get a refund of €10 at specified Stiles on the day (on production of valid I.D.)

Juvenile Groups – There will be a limited number of Juvenile Groups available for this game. Your initial allocation is 200 – €3 per Juvenile with a free Adult with every 10 children. Other adults pay €25.

All Groups should be booked directly with Co Board and Munster GAA will then issue tickets to the County board. All groups should pay their Co Board for tickets.

This game will be shown live on TV3.

Cork and Clare have met in three Munster Senior Football Finals with Cork winning two while Clare won the Munster title in 1917.

Eddie Kinsella (Laois) will referee the Munster Senior Football Final and was also in charge when the sides last met in the Championship in 2011.

Cork have won both competitions entered thus far in 2012, Cork won the McGrath Cup in January with victories over Clare, CIT and Tipperary, conceding a total of 20 points in 210 minutes of action. Cork then progressed to win the Allianz Football League Division 1 title for the third consecutive year. During the 7 group matches in Division 1, Cork conceded the least amount of scores (an aggregate of 78 points). Kerry had the second best defensive record with a concession of 86 points on aggregate. Cork’s defensive record in the 12 competitive matches played in 2012 has seen them concede an average of 8.16 points per game.

Cork and Clare will end a 63-year wait for a Munster senior football final clash when they meet in the Limerick Gaelic Grounds next Sunday (2.0). The last of their three Munster final clashes was back in 1949 when Cork won by 3-6 to 0-7 in Limerick. It has been an incredibly long wait for their next meeting in the final but has finally come about after Clare beat Limerick and Cork beat Kerry in the semi-finals. Cork are seeking their 37th Munster title while Clare are chasing their third, having previously triumphed in 1917 and 1992.

How they got here….

Clare beat Limerick by 1-13 to 0-15 in the Munster semi-final. Clare led by 1-9 to 0-3 at half-time and withstood a fierce Limerick onslaught in the second half to edge home by a single point. Indeed, Limerick led by a point with four minutes remaining but Clare battled back and two late points by David Tubridy sealed victory. Cork beat Kerry by 0-17 to 0-12 in the other semi-final. Cork led by 0-7 to 0-4 at half-time and by 0-13 to 0-11 after an hour before out-scoring Kerry 4-1 over the closing ten minutes. Donncha O’Connor was Cork’s top scorer on 0-6 while Colm O’Neill kicked 0-5.

It will always be regarded as one of the great days in Clare sporting history as their footballers upset the odds and beat Kerry by four points in the Munster final. Managed by John Maughan, they stunned the Kerrymen with goals in the 51st (Colm Clancy) and 58th minutes (Martin Daly) sending Clare on their way to a first Munster title for 75 years.