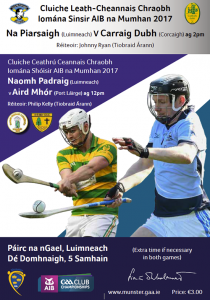 Plenty to discuss after that weekend of club hurling action! Want all the highlights in one video? Check out the GAANOW Weekend Round-Up! pic.twitter.com/TQ9771Ct0x

Na Piarsaigh dispatched of Blackrock with ease to advance to a fourth Munster club hurling final in seven years.

The Caherdavin club has never been beaten in Munster competition and will look to keep that record intact in a fortnight’s time when they meet Ballygunner.

This Munster semi-final was done after 17 minutes, Na Piarsaigh striking two goals in little over a minute and a half to rubberstamp their early dominance and put sufficient daylight between the sides.

The Limerick champions had built up a 0-8 to 0-3 lead when Adrian Breen slipped Peter Casey inside the cover and the All-Ireland U21 winner crashed the sliotar to the roof of Gavin Connolly’s net on 16 minutes.

John O’Sullivan pointed in a swift reply by the Rockies, but in the ensuing passage of play, David Breen hopped the sliotar in front of Connolly for Na Piarsaigh’s second goal. At 2-8 to 0-4, it was as good as game over.

Ronan Lynch’s fourth free of the half and a pair of points from the lively Casey had the home outfit 2-11 to 0-6 to the good at half-time.

Lynch threw over two frees before Alan O’Callaghan registered Blackrock’s first score of the second half. They wouldn’t score again for 17 minutes and only managed four points throughout the entire second period.

Gavin Connolly was twice called into action to deny Peter Casey. At the other end, Ronan Lynch finished with 15 points.